Photostory of a day in Milan, between Orticola and the Best Wine Stars 2018 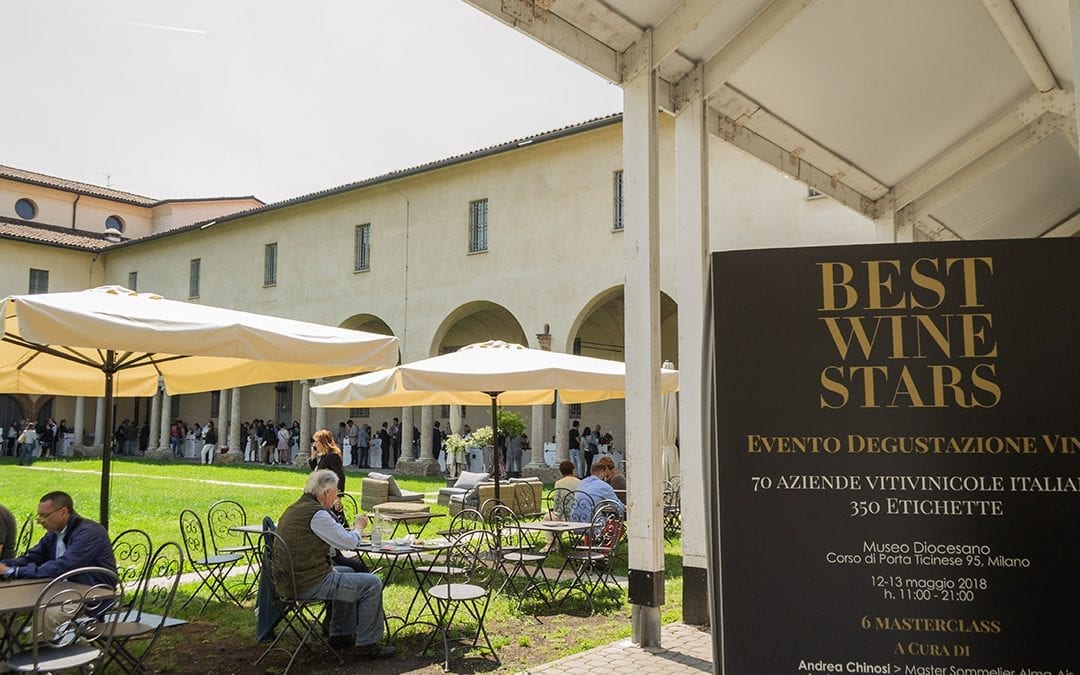 Anyone who knows me knows that when I have to leave the lake to go to the city I feel an incredible discomfort. The traffic, the confusion, the noise of the horns, the stifling air… and yet Milan has something special in its ability to be the frequent home of fascinating events. This weekend two special events were held: 2018 Horticulture and Best Wine Star 2018. For me, who are passionate about wine and orchids, what more could I want?

"Orticola is a historic association founded in 1854. In 1865, with the signing of the foundation deed in Milan, it became the Lombardy Horticultural Society, on the model of the Société d'Horticulture de France, with the vocation of passing on the culture of plants, the art of the garden and the vegetable garden, and for the preservation of the spontaneous vegetable landscape. The Horticultural Show, which was reborn for Milan in 1996, has the purpose of raising funds for the city's green areas ”.

In short, there should be an "Orticola" in every city: I believe that all Orticola visitors were happy to pay the € 11 admission, knowing that these are used for the arrangement and design of public green areas of their city! 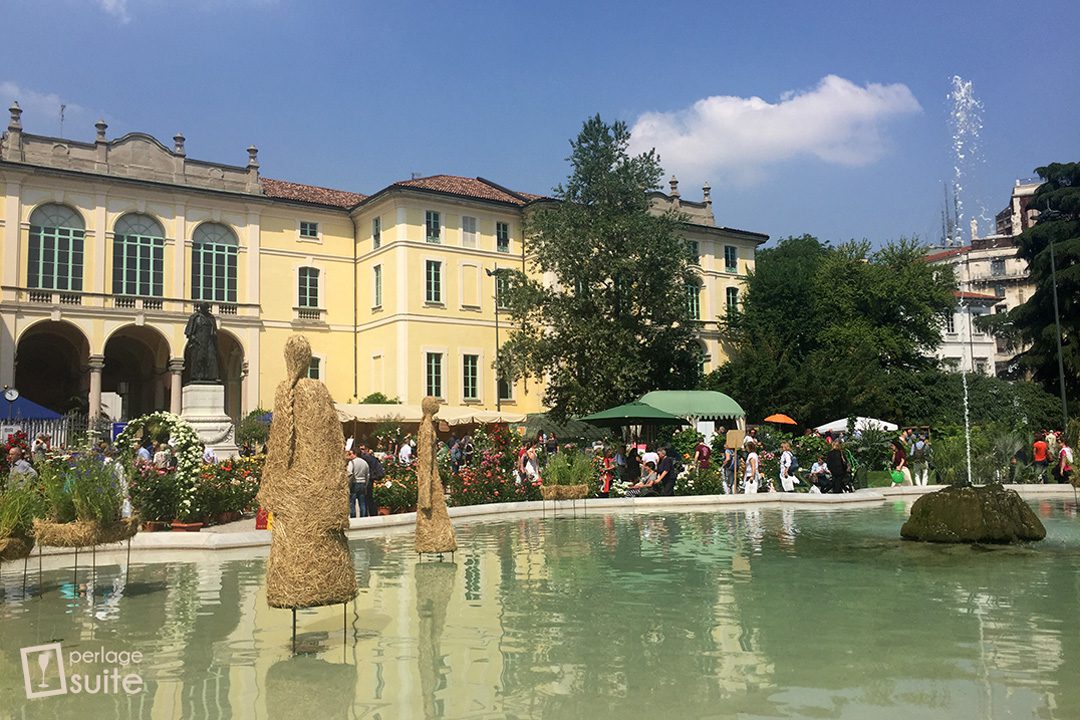 The Horticultural Show has always been held in the Indro Montanelli Gardens, a location that I had never visited and that I found a real relief from the "greyness" of the streets and buildings in Milan. 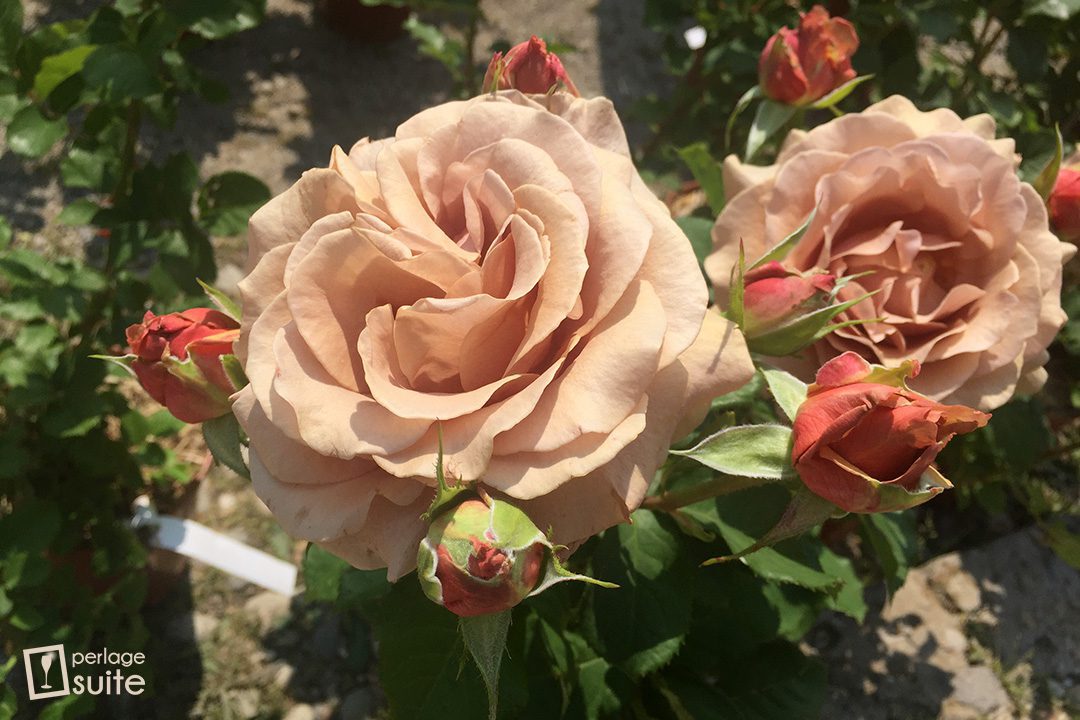 I found these roses of a wonderful color… I had never seen roses with such a beautiful color! I recently tried my hand at growing roses with a beautiful wine-colored wine by David Austin that Paolo Pozzo from Vivai Pozzo near Santhià gave me. I hope to be able to make it bloom: between frosts, thunderstorms and caterpillars the buds have been fighting for over a month to show me their splendor! 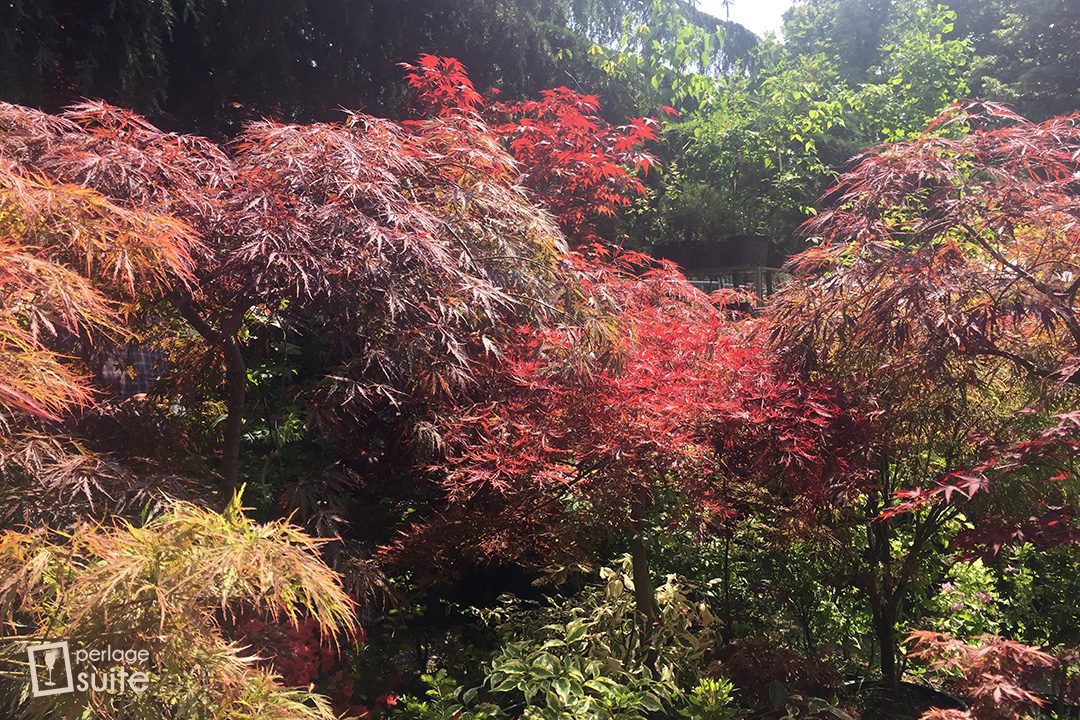 I think these are dwarf Japanese maples or something that looks a lot like us… I think that in my garden by the lake they would look very good, as long as they don't grow too much because if they obscure my sight then I have to turn them into bonsai! 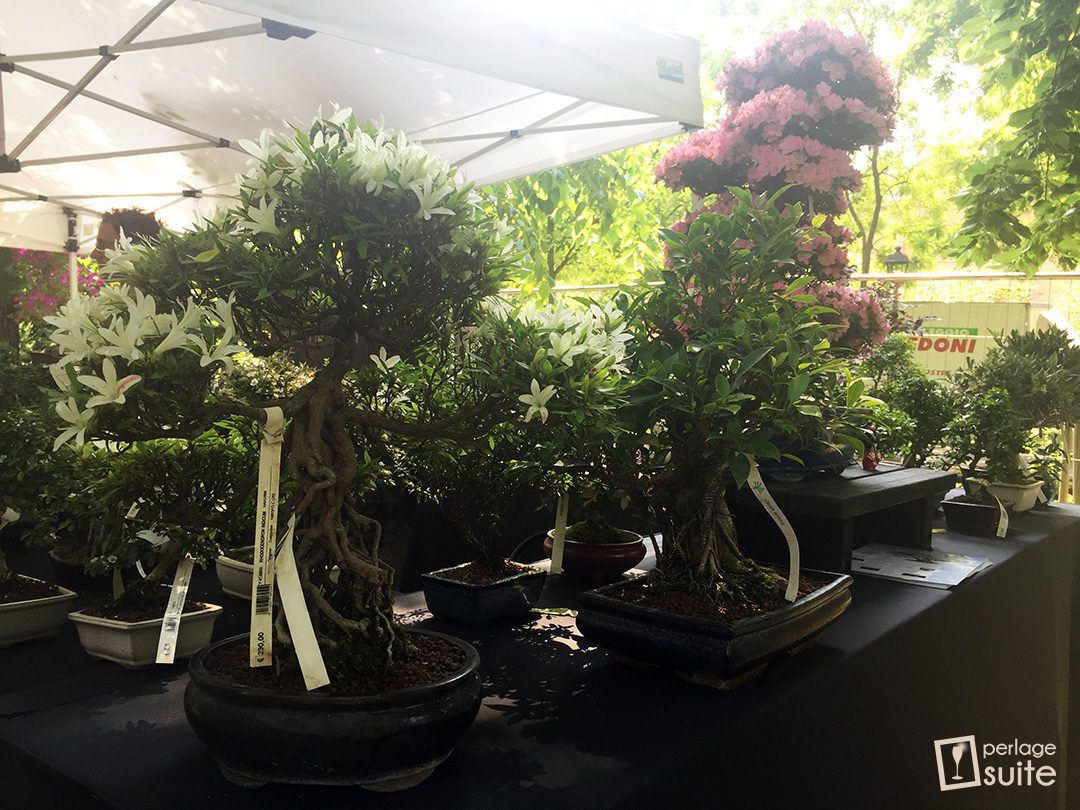 Speaking of bonsai, how gorgeous they are! I am literally in love with it ... even if for now I am satisfied with having transformed my house into a kind of Thai paradise ... but you can always do better! 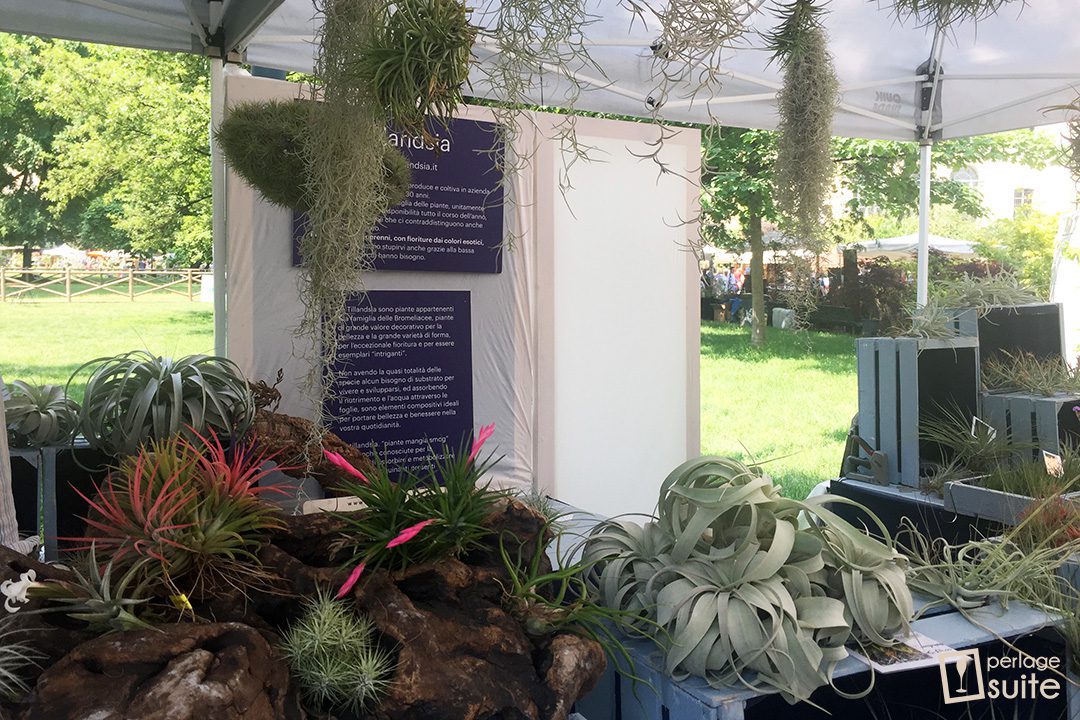 Here, Tillandsia is a genus of plant that until recently I did not know ... Or rather I had seen the most common hybrids hundreds of times with orchids, but I did not think there could be such beautiful ones in terms of vegetation! And then lots of Kokedama! I cultivate a Promenea like this and I must say that it is exploding with jets and buds! A Kokedama as beautiful as mine with an orchid inside you can buy it HERE. 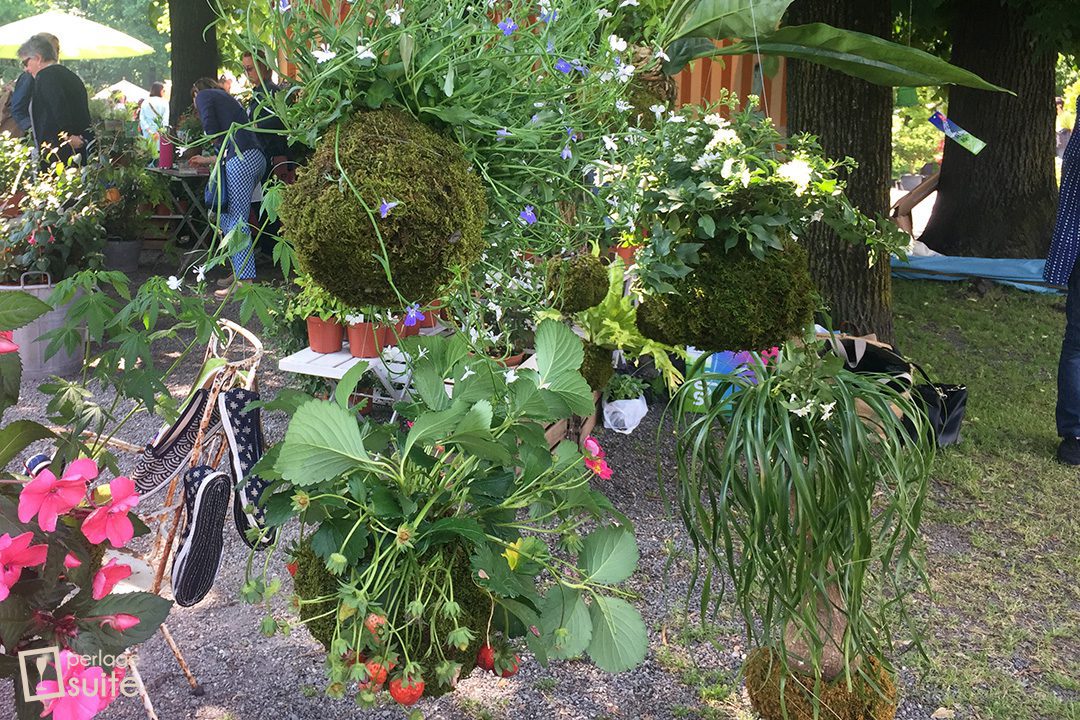 Overall I have to say that I found exhibitors of good quality, although for me I was mainly there the lack of was felt for orchids Michele Cesi of I Love Orchid and Claudio Nardotto. I found the stand of the famous Giancarlo Pozzi of the Orchideria di Morosolo to say the least subdued compared to the expectations I had placed on it. Nothing to buy: little choice of plants, the "usual" orchids and not so beautiful plants. I don't publish the photo because it's really not worth it. I hope I will see their stand again or visit his Orchideria and make my eyes shine… but for what I saw in Orticola only so much disappointment! 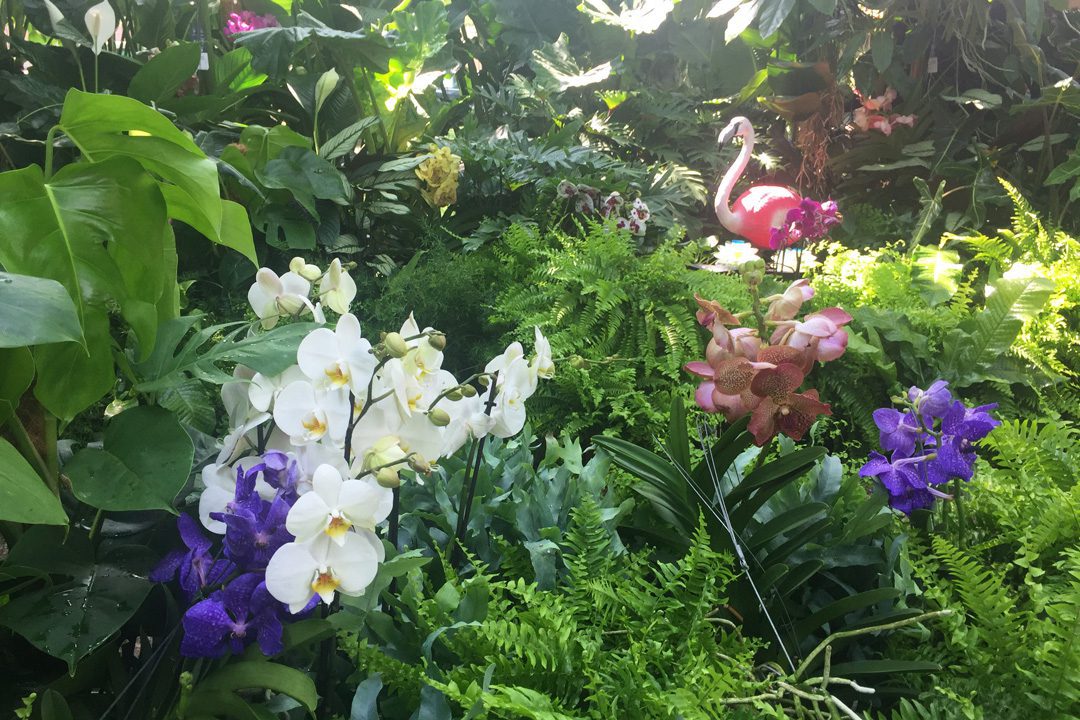 The stand of the more interesting Sughereto: apart from the "usual orchids" here I saw some rafts that to say delicious is an understatement. Too bad that I am absolutely denied with the rafts ... I would be able to iron even the raft most attached to life! The two orchids that they had on display from their private collection are also beautiful! 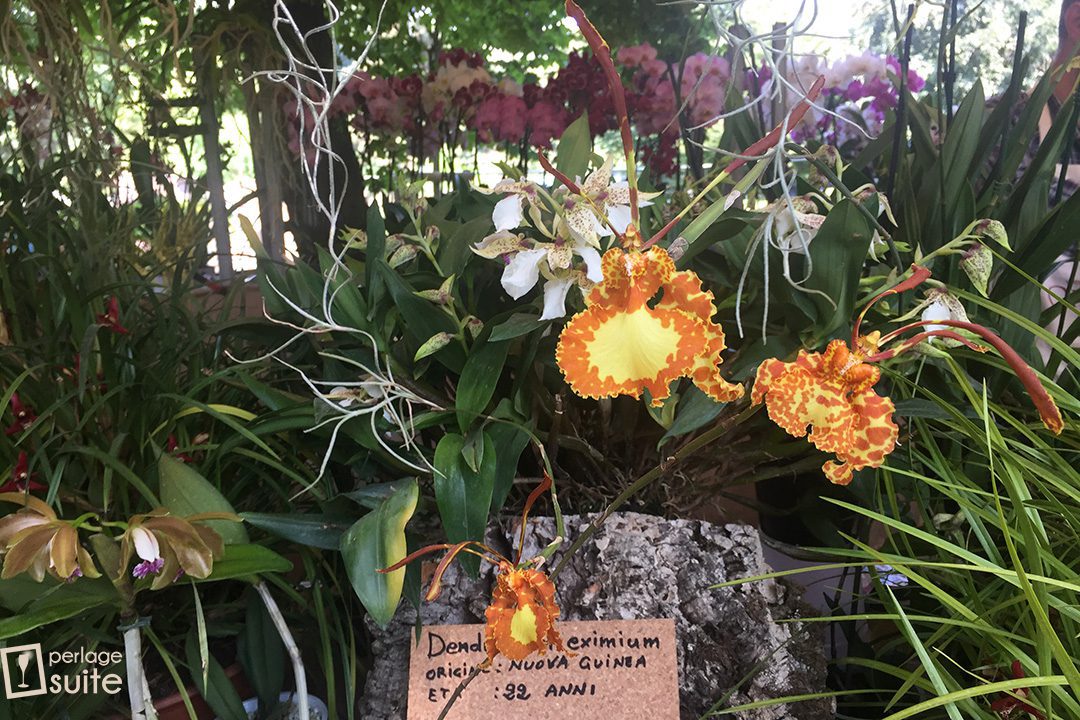 Finally the stand of Giulio Celandroni and Elisa Aprili… Which was certainly the best stand there was for orchids. Of course, here too something inflated, but the plants made a great impression. I still regret not having taken a maxillaria that smelled of coconut ... but how could you leave this Brassia Ethernal Wind there looking at you in the foreground? Beautiful flowers, too bad it doesn't smell like my Brassia Toscana and it was devastated on the return trip. After all, Giulio told me: "this year you are lucky, look at the beautiful sun ... last year it was raining!". I arrived at the lake and I also caught the hail… what a fortunella! However, the Phalaenopsis bellina that Fabrizio gave me for my birthday has arrived home intact (at least she) and maybe she is already throwing me a stem! 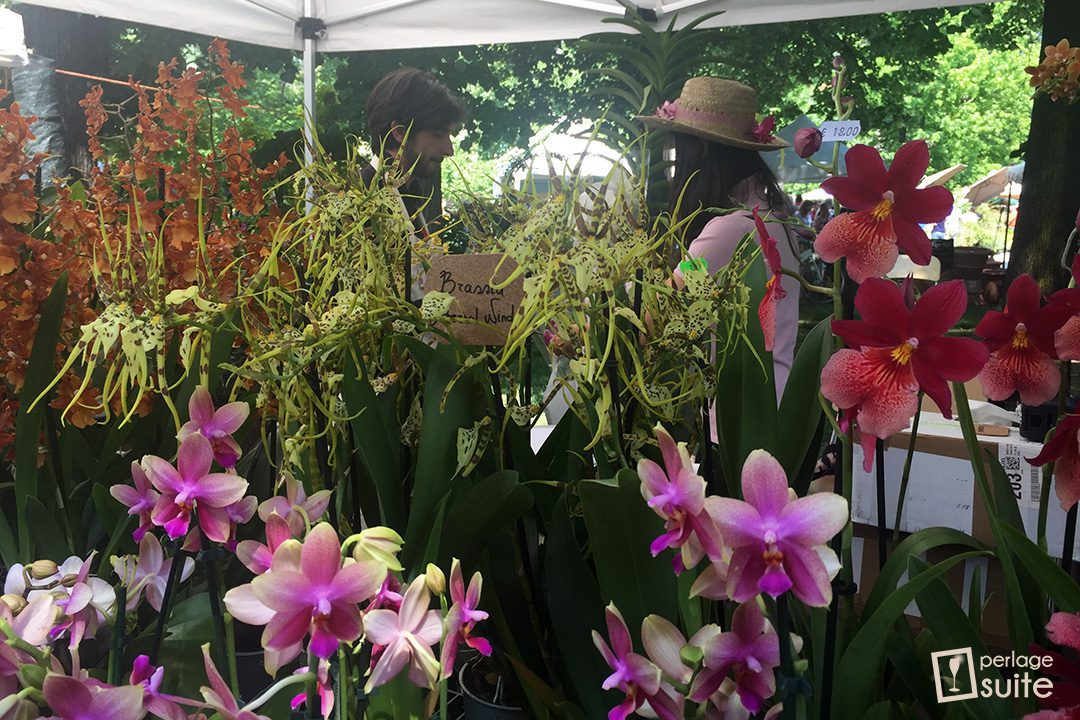 I must say that in Orticola I found an inflation of Vanda della Anco from all over the place… too bad! I still remember the 2 Vanda Anco that they gave me at the Flover in Bussolengo (the second as a tribute to replace the first sick one, who, however, went the same way as the first in even less time!) ... they will also cost only € 40/45 in the gardens but it is really wasted money! The same end was also made by all those of my farming friends… so it certainly did not depend on my home (also because that of Michele Cesi that I had for years was fine!). This is why I wouldn't want to see them from Italian producers!

And after the short tour in Orticola ...

I flew to the first edition of the Best Wine Stars!

How nice when on the same day I can splash from one side to the other and combine my two passions! A very beautiful location for the Best Wine Stars, the only flaw is the difficulty of parking for those like me who are allergic to public transport! Honestly, I always prefer events that are located in accessible areas and with convenient parking nearby that don't ask for a kidney to leave the car for half a day ... but never mind, this area of ​​Milan is still beautiful! 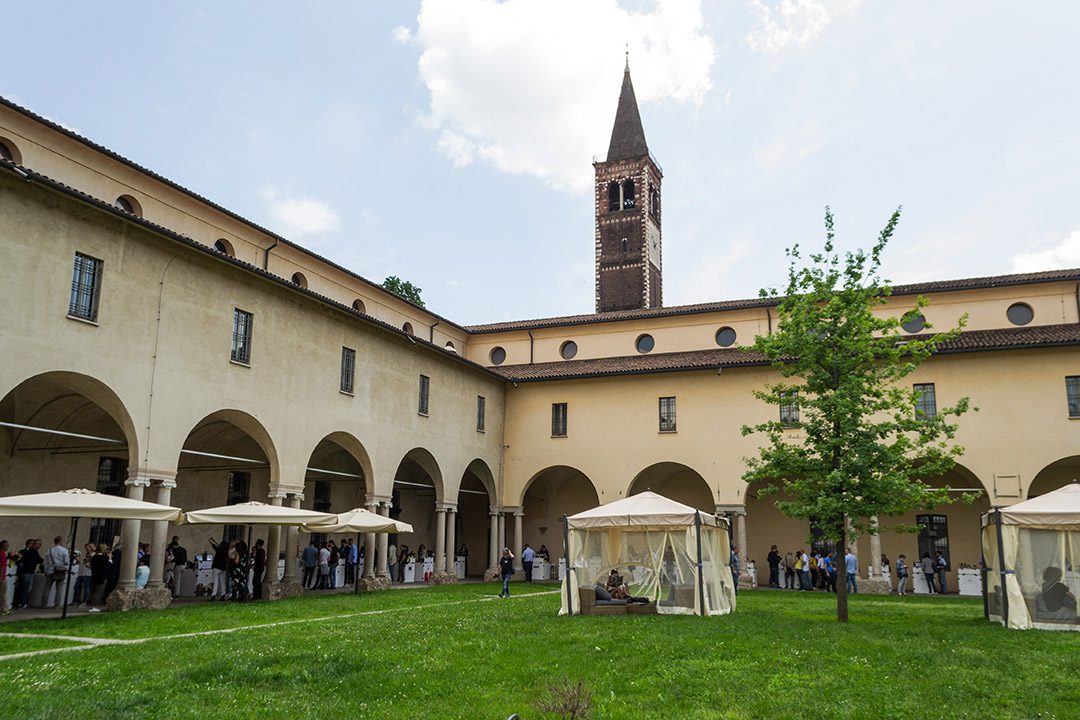 But let's talk a little about wine !! So I state that I was really happy to participate in the Best Wine Stars because I discovered some gems I really fell in love with! The wine that I liked the most is from Abruzzo from the Castel Simoni company: Lupa Bianca, Riesling Renano. Before this event I had never tasted it! I am not unbalanced in the tasting because I tasted it not in ideal conditions… but a really great wine with a mineral nose, rich in notes of hydrocarbons and aromatic herbs and a savory and balanced taste. I admit that I have never considered Abruzzo as the land of Riesling: I have always seen it as an Adriatic region of Central-Southern Italy. Wrongly, I often forget that there are two regions of Abruzzo oenologically: on the one hand the Abruzzo overlooking the sea, on the other the mountain Abruzzo. The products of these two regions can only be profoundly different! In short, I hope to taste it even more calmly at home to be able to make a more in-depth evaluation! 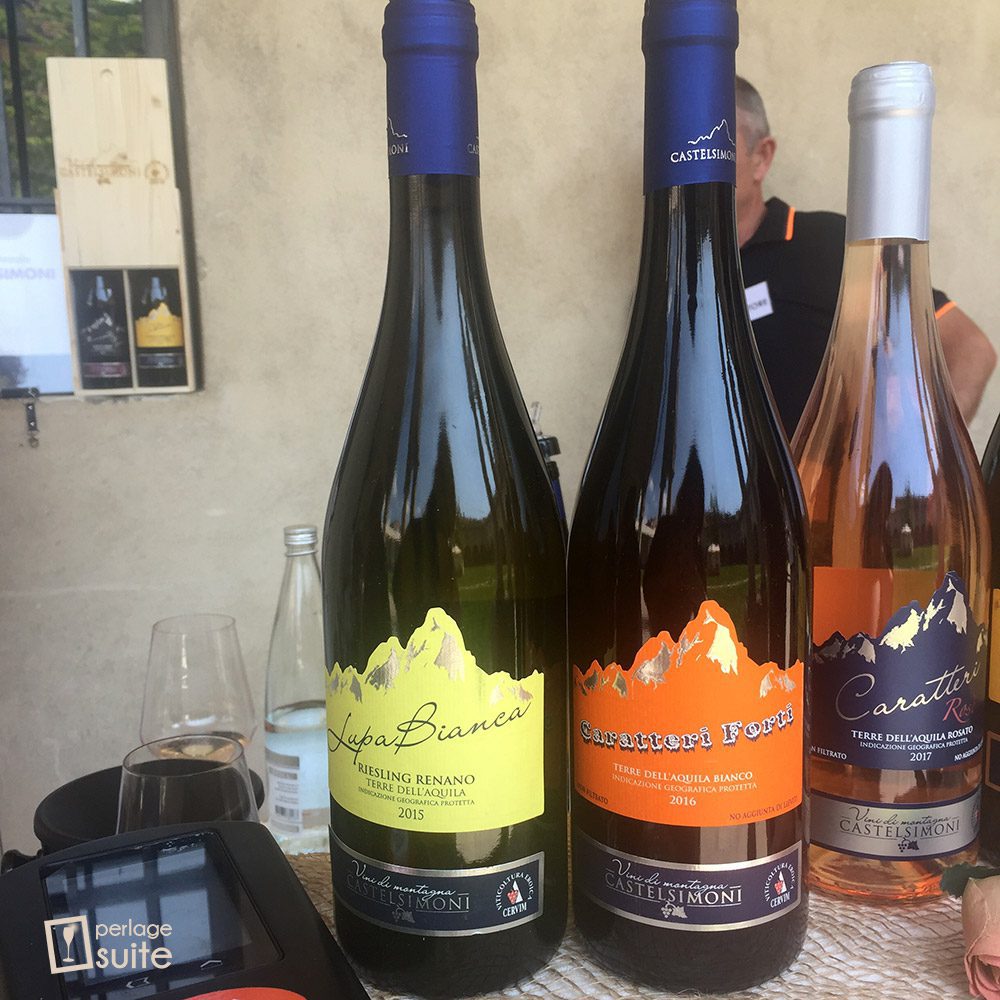 The second wine I liked the most is frompugliese oenologist Giovanni Aiello: an integral bubble that I reserve the right to evaluate in the 2019 edition of mine Guide Sparkling Wines 500 Bubbles in 500 (which you can buy HERE). A surprising guy with a lot of passion who makes wine by hand in every part, including the labels! With a special color-dyed mold he paints his bottles by hand. The result? Each bottle is different and certainly stands out on the shelf of a wine shop! The wines are very drinkable… the bubble is the bottle to open with friends that flies away in an instant! However, I also really liked the rosé ... even here I reserve the right to do a more in-depth tasting calmly and in the right environment! 😍 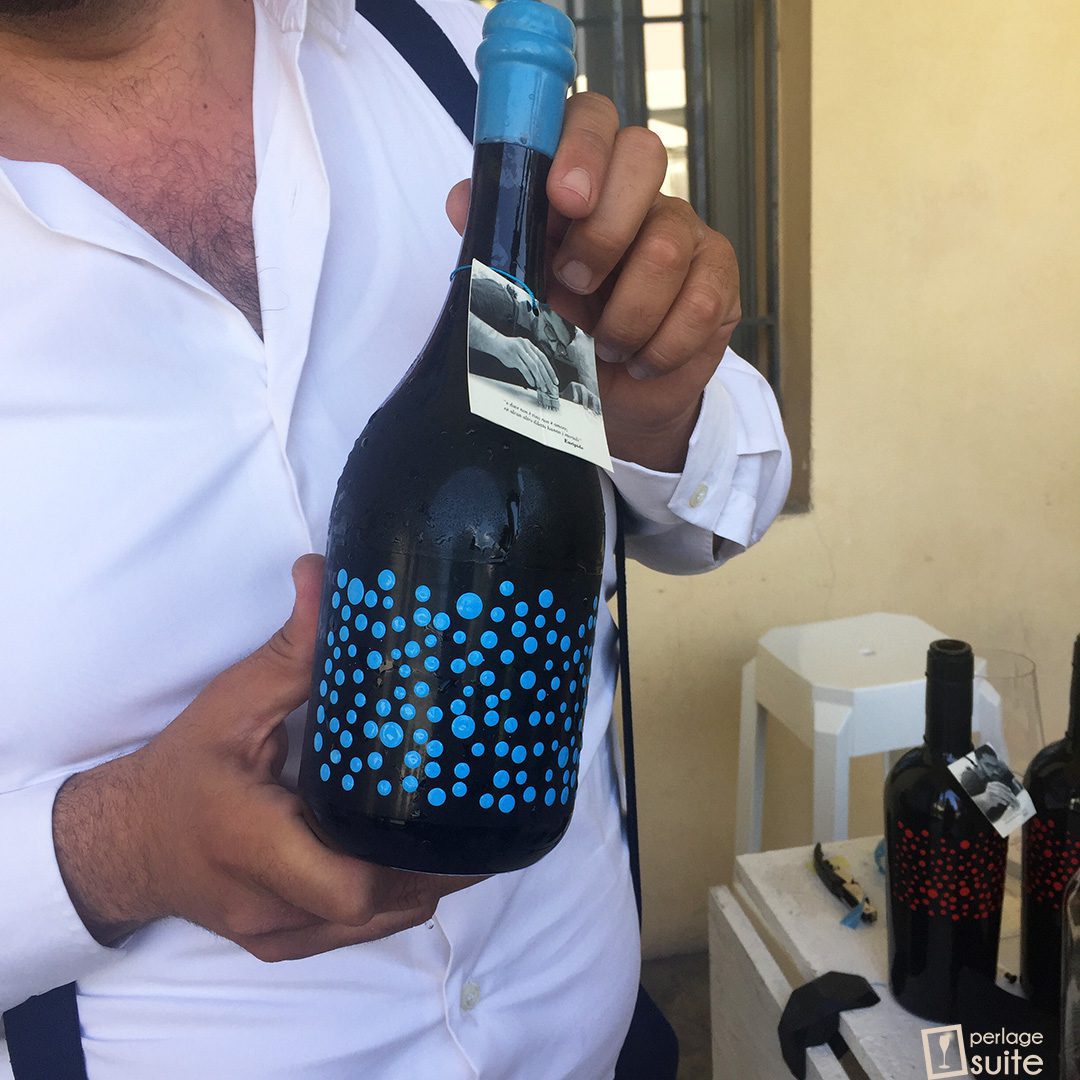 Another wine that I really enjoyed is Najma, the Prosecco Vintage of Vigna Belvedere which takes its name from a boat which in turn is named after a beautiful Algerian girl. A good story for a prosecco with great balance, crunchy and at the same time soft, with the characteristic hints of apple, hazelnut and hawthorn and an elegant finish. 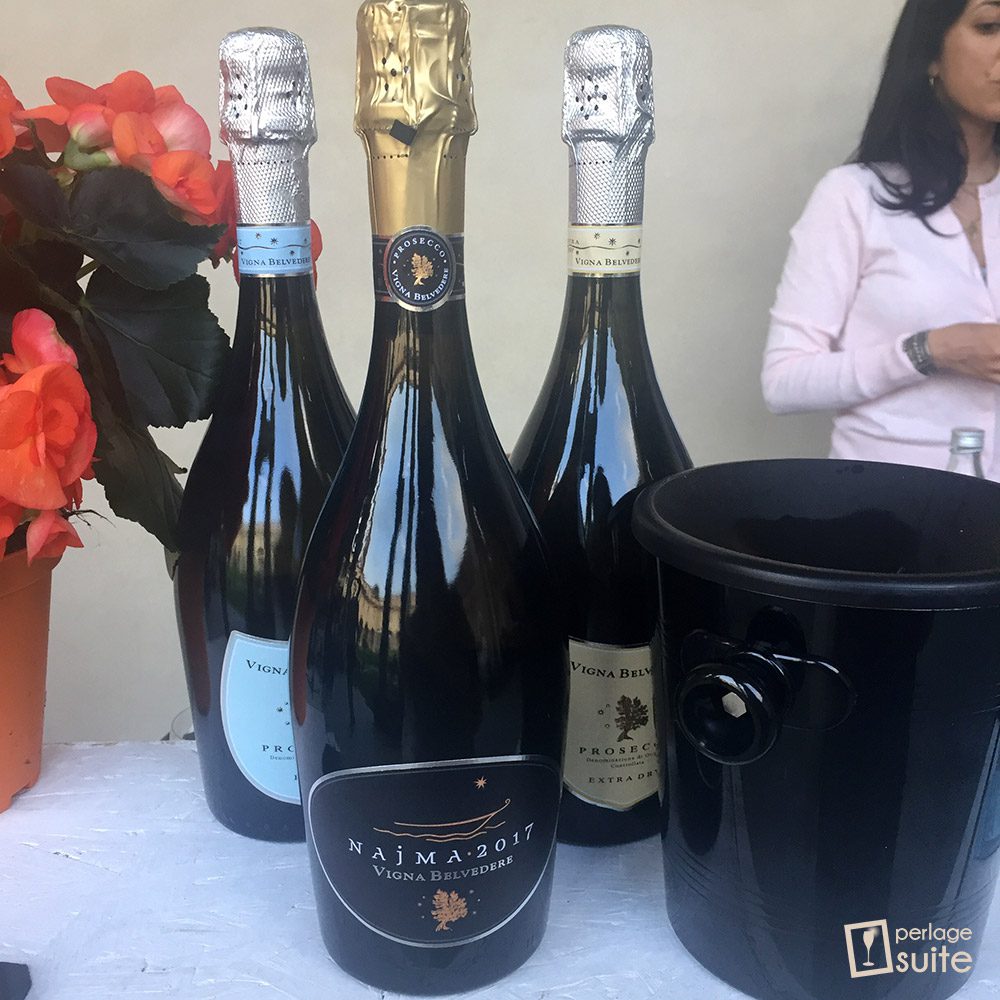 My little trip to the land dedicated to the production of Prosecco led me to discover another company: Sarah's Vineyards. The girl present at the banquet told me with passion of a enchanted place, an organic farm where you can even sleep in barrels equipped with every comfort! Charming! As for wine, Bunches of Moon it's a prosecco vintage which has the particularity of following a nocturnal harvest. 170 glues represents a “more classic” version of the Prosecco, more vertical than Grappoli di Luna, but still very drinkable. 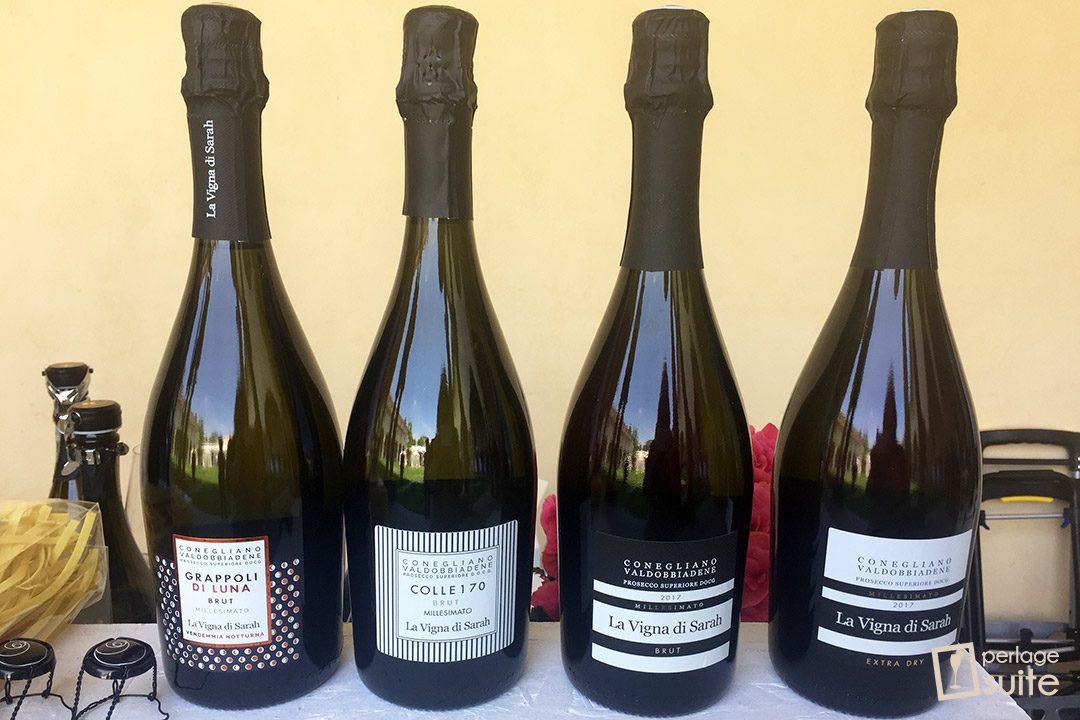 And finally, a greeting to the Three Gems is a must, even if in the photo the third gem had not yet arrived and the “gem” shone in its place! I have already said it, but Passerina d'Abruzzo, even if it is not my vine, this year came super! Perfect for an elegant and disengaged aperitif of rare pleasure! For more information on this company you can read this article: Communicating Abruzzo wine: backstage between characters, art, land and history. 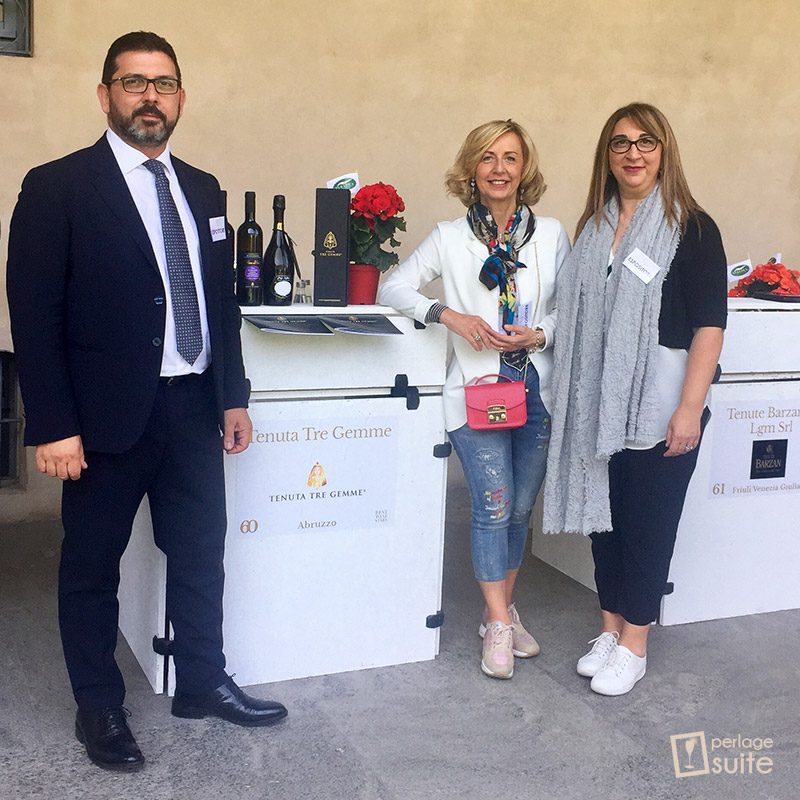 Finally I must say that I ate a splendid sandwich, with the raw Piedmontese fassona! And I also tasted delicious mixed cheeses, but despite having brought home two, I didn't get to take the picture! 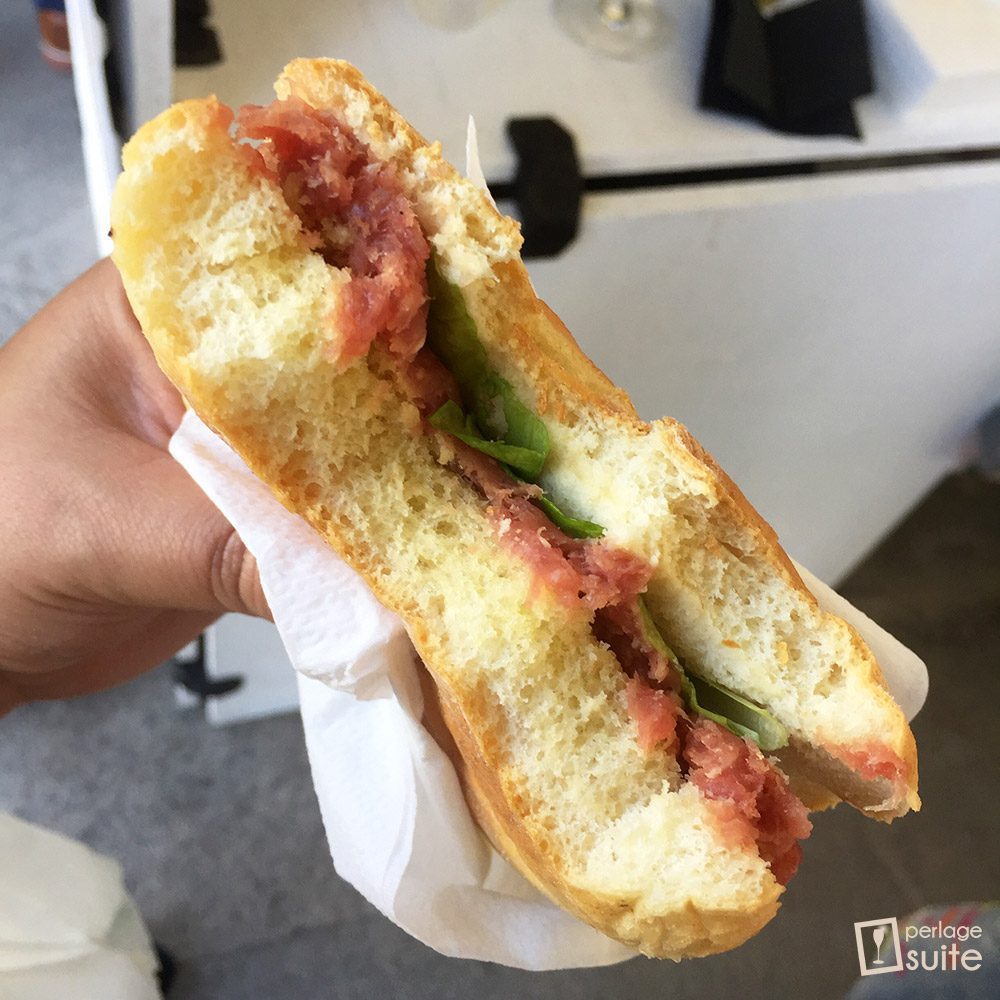 What to say, really a beautiful day between wine and orchids! I was also happy to meet Patrizio Busa from Tannini Setosi to whom I have promised an interview for a long time that I am delighted to do this weekend! Finally, the machines on which to place the glass and select the tasted wines that they send you by e-mail the data sheets are crazy cool and every wine event should use them (I just have to check their names, but I'll write it in a comment)!