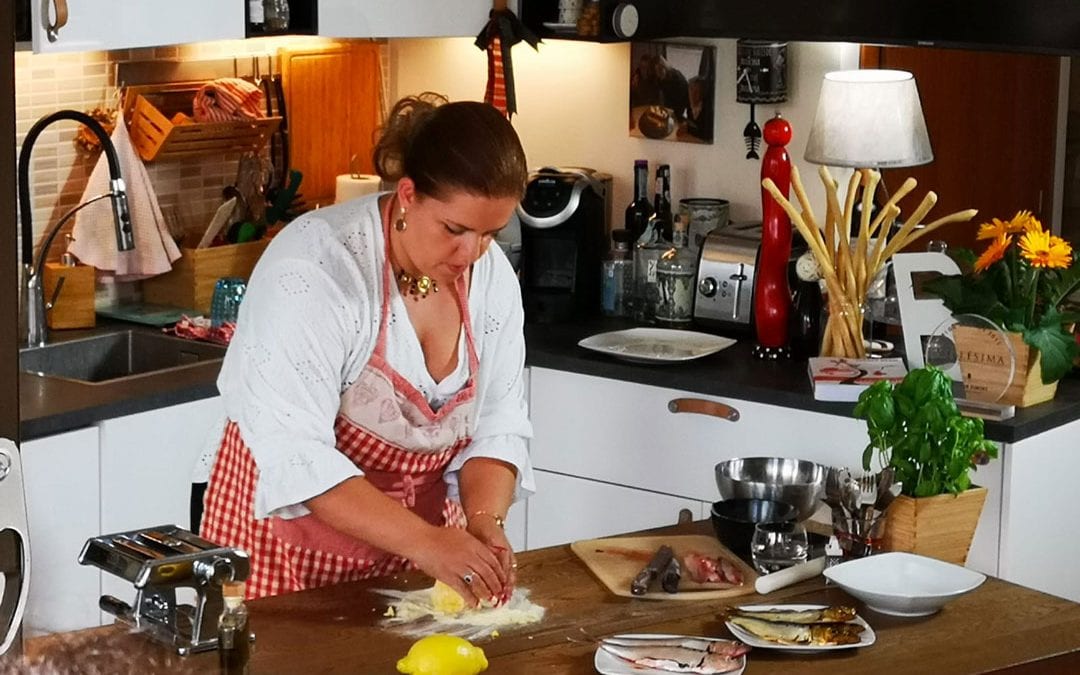 Today in Monte Isola we shot a documentary for an episode of Geo that will be broadcast on Rai3 next season… I can't wait to know the date! I represented Monte Isola for the gastronomic part and it was an honor to choose a dish to show. So this morning I went to get the catch of the day from Nando Soardi in Carzano. The fishing was abundant: beautiful, large and fleshy agons. So I thought of making casoncelli with a variation of agone: fresh inside and dried outside. The latter here is called Monte Isola sardine and is a Slow Food presidium. To prepare them I also chose the saffron pistils grown here on the island by the Dame Rosse and the extra virgin olive oil cultivar Sbresa by Maurizio Ribola. Just one detail: my casoncelli look more like cappelletti ... but they are Azdora inside!

For non-Romagna people… the Azdora is there attentive and passionate guardian of gastronomic traditionse of a region that makes good food and hospitality a true cult. 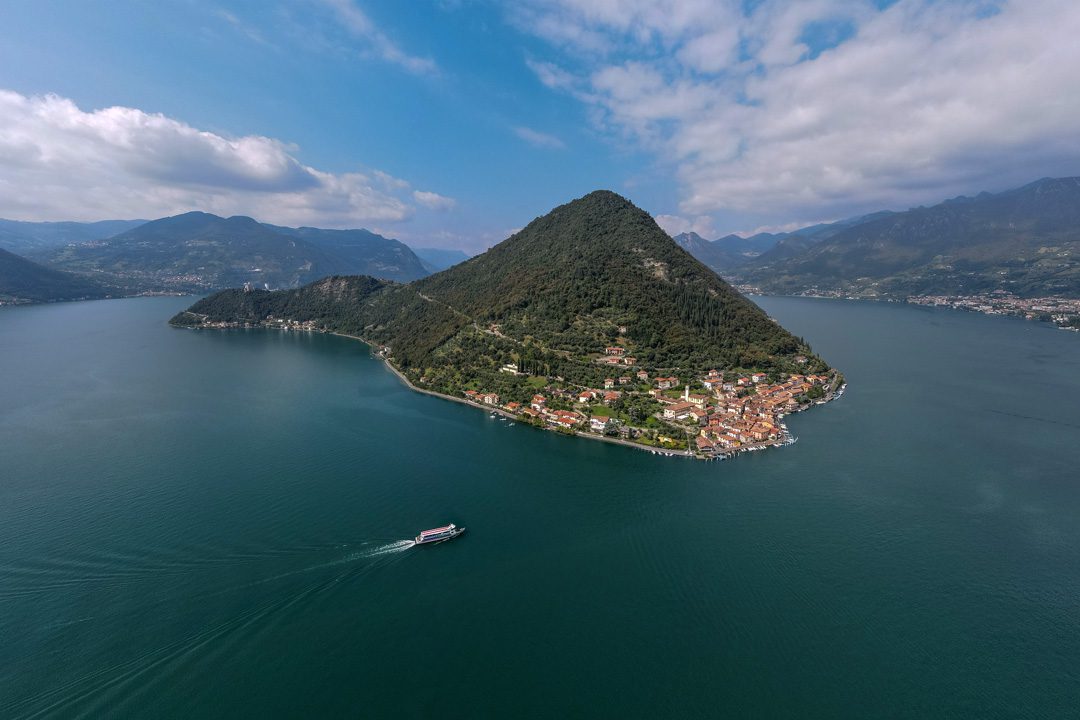 The agone, a delicious lake fish whose shape resembles that of the sardine, is the protagonist of a tradition of Lake Iseo and Monte Isola in particular, so much so that it even gave rise to the surnames Archetti, Archini ... from the local dialect archèc with which the arched ash woods were called in which the fish was dried.

The technique has been handed down over the centuries and seems to date back to the year 1000 when the fishermen of Monte Isola had to deliver a precise quantity of dried fish annually to the Monastery of Santa Giulia in Brescia. This assignment contributed to the development of craftsmanship linked to the production of fishing nets and wooden boats, the traditional naét very similar to Venetian gondolas.

Agon fishing is practiced all year round, but reaches its peak in late autumn and winter. The few remaining fishermen go out at sunset and place the sardeners - deep nets - in the middle of the lake - at least 200 meters from the shore - anchoring them to the buoys. At dawn they return and hoist them, then immediately eviscerate the agons with an incision in the belly or under the head. At this point the fish is washed in running water and left to rest for at least 2 days in salt before being left to dry in the sun for about 1 month, always in winter to avoid insects. In summer, drying would be too fast and therefore unsuitable. One by one the sardines are threaded into taut threads traditionally tied to the ends of the arches that were once even present in the fishermen's boats. Today the drying system has been perfected and takes place in larger structures placed on shaded terraces. The agons are nailed by the head to the hooks present on the small wooden planks - arranged in parallel rows - of the frames. At this point the pressing takes place: they are arranged in a circle in a wooden or stainless steel container and softly pressed to release the fat which is eliminated immediately. The agoni are covered with olive oil. This method of conservation allows the Monte Isola sardine to last several months, or rather the more it rests the better it becomes! If you change the oil every 6 months, it can last up to two years.

In my experience, after a few months they are there they are also delicious raw, but traditionally they are eaten seared on the grill or in a pan with a drizzle of extra virgin olive oil, garlic and parsley.

For the fresh pasta:

For the saffron butter 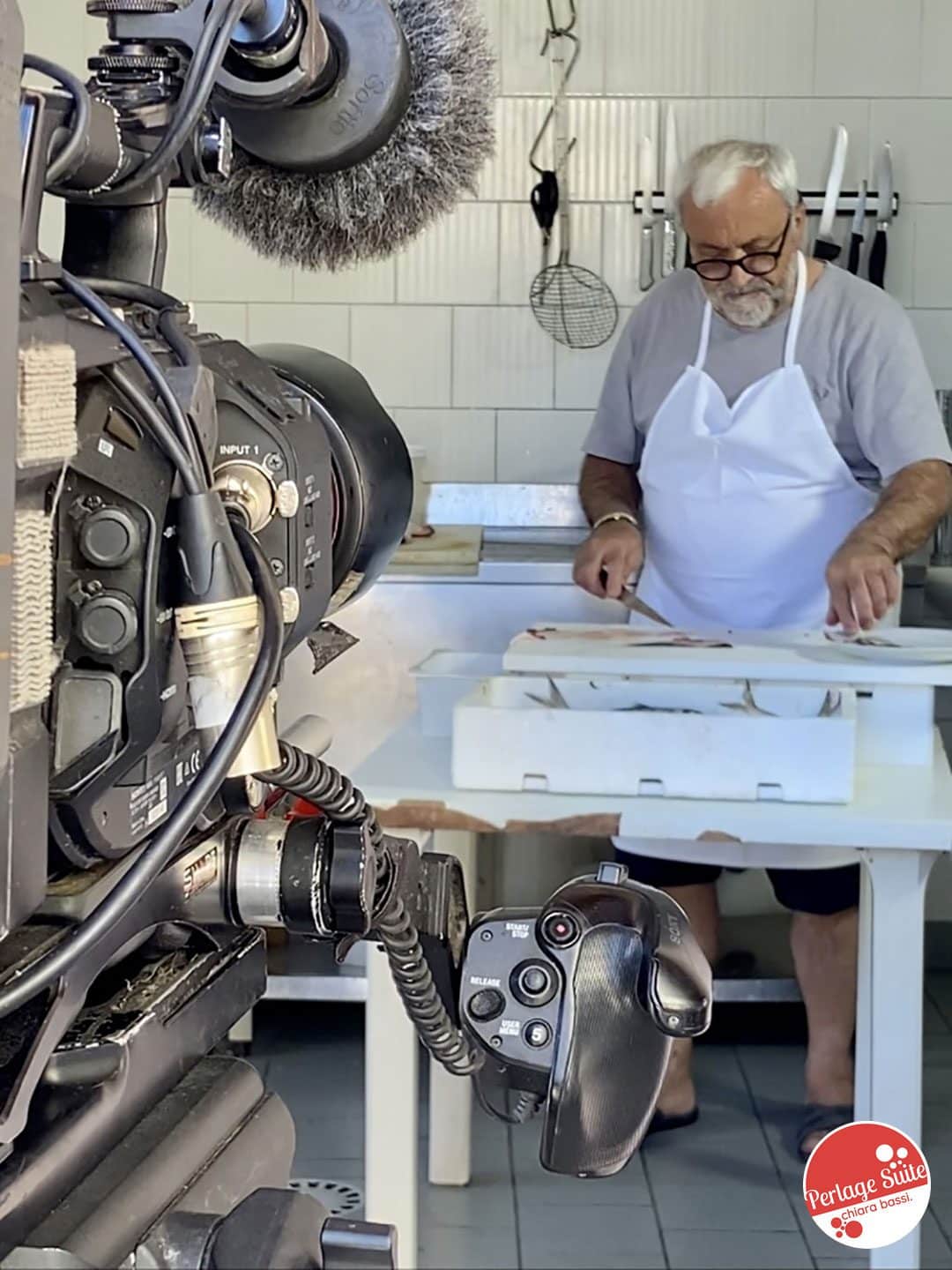 At least an hour before starting to cook, put the saffron pistils in a coffee cup with 2 tablespoons of warm water. I infused the saffron pistils the night before for 3 hours. There are those who tell you to use hot water, but it makes no sense because saffron is thermolabile and is ruined with heat ... so much so that we will use it "raw". So it's better to be patient to enjoy its delicious scent!

Take 50g of centrifuged cream butter and put it in a bowl. Strain the saffron-scented water through a colander and keep the pistils aside. To taste, add a pinch of fine salt. Stir very very well with the whisk. Chop the pistils with a knife on the cutting board, add them to the butter and mix well. Put it in the fridge for 10 minutes, then give it the shape you prefer with the pastry cutter. Keep it in the fridge until ready for use. 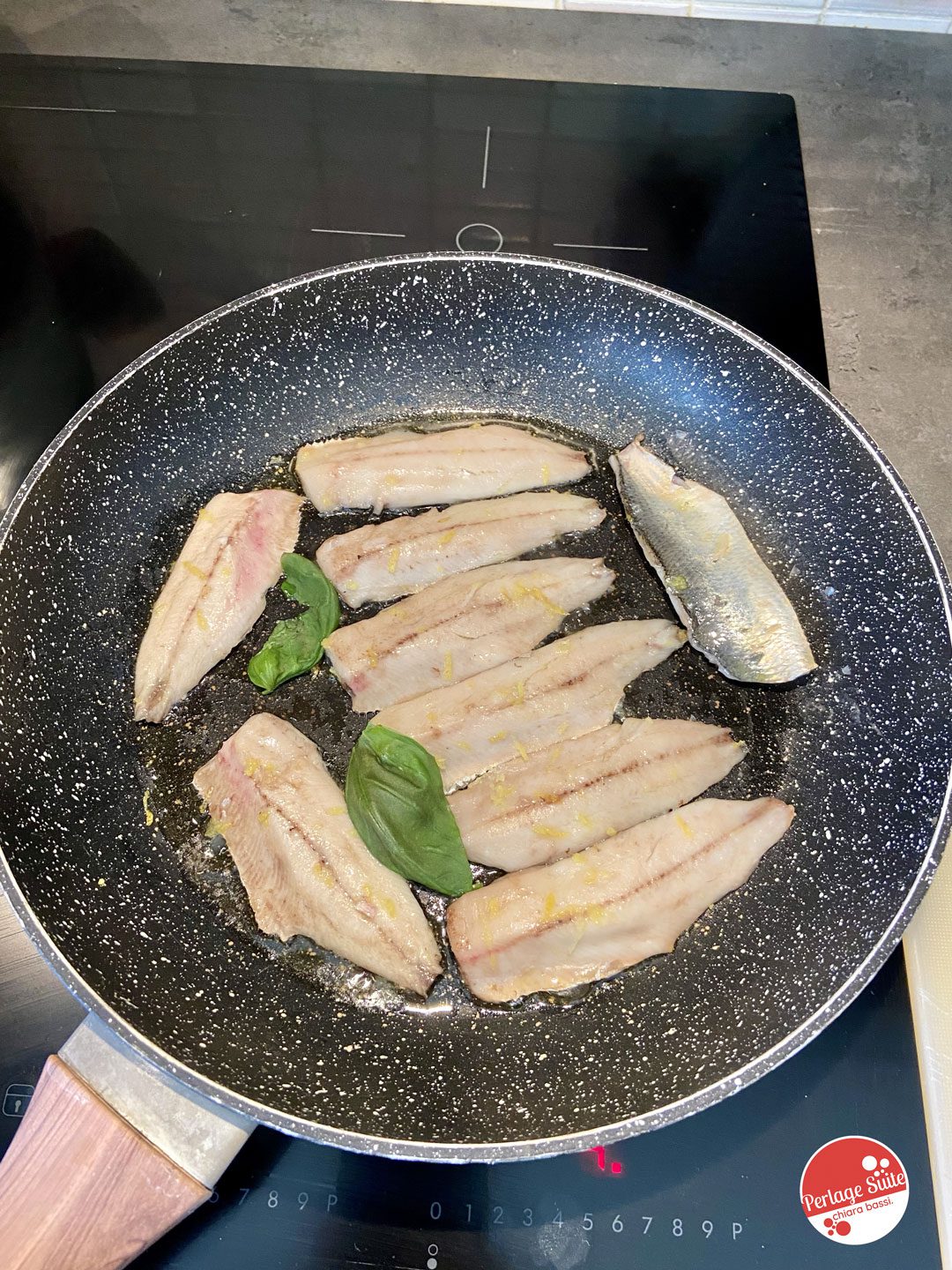 Chop the fresh basil with your hands then put it in a bowl with the mascarpone, the tip of a teaspoon of nutmeg and a pinch of fine salt (optional). Fillet 2 needles, remove the thorns with the help of tweezers (such as the eyebrow one) and keep the heads aside. In a non-stick pan put the garlic clove, a tablespoon of oil and a basil leaf. Cook the fillets a couple of minutes on each side, without exaggerating because they will complete the cooking inside the pasta. Remove the basil and set aside the pan with the garlic, oil and cooking sauce. Transfer the fillets to the bowl with the mascarpone and basil mixture. Add the breadcrumbs. Stir with a spoon and taste: if it is perfect for you, if not, adjust with fine salt and nutmeg. Keep it in the fridge until ready for use (at least 30 minutes before for it to be perfectly workable). 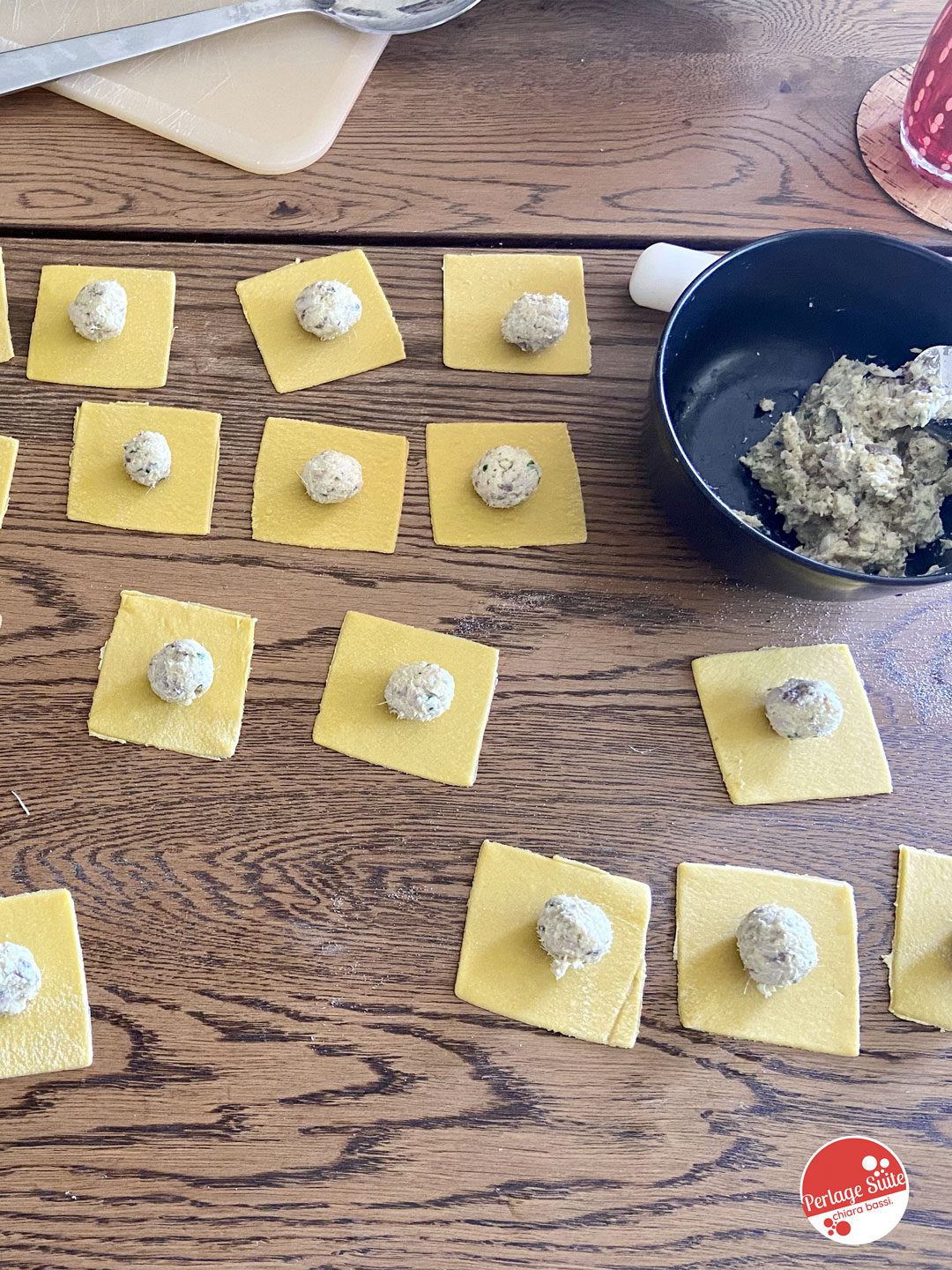 Since we are not housewives or desperate housewives, we use the mixer and the pasta machine. In the bowl of the mixer, the re-milled durum wheat flour and the eggs. Mix with the hook until you get a smooth and homogeneous dough. Work it with your hands for a moment until it forms a ball and cover it with the bowl for about 30 minutes before rolling it out.

NB. Each flour is different, so you may need a little more or less moisture. If the dough needs moisture, take another egg. Separate the yolk from the white and proceed to add the yolk a teaspoon at a time until the consistency is perfect. If the dough is too soft, add a teaspoon of semolina flour or even more until the dough no longer sticks to the edges of the bowl.

The dough must be soft and elastic, it must absolutely not stick. Keep in mind that staying under the bowl will gain moisture and become even more workable. 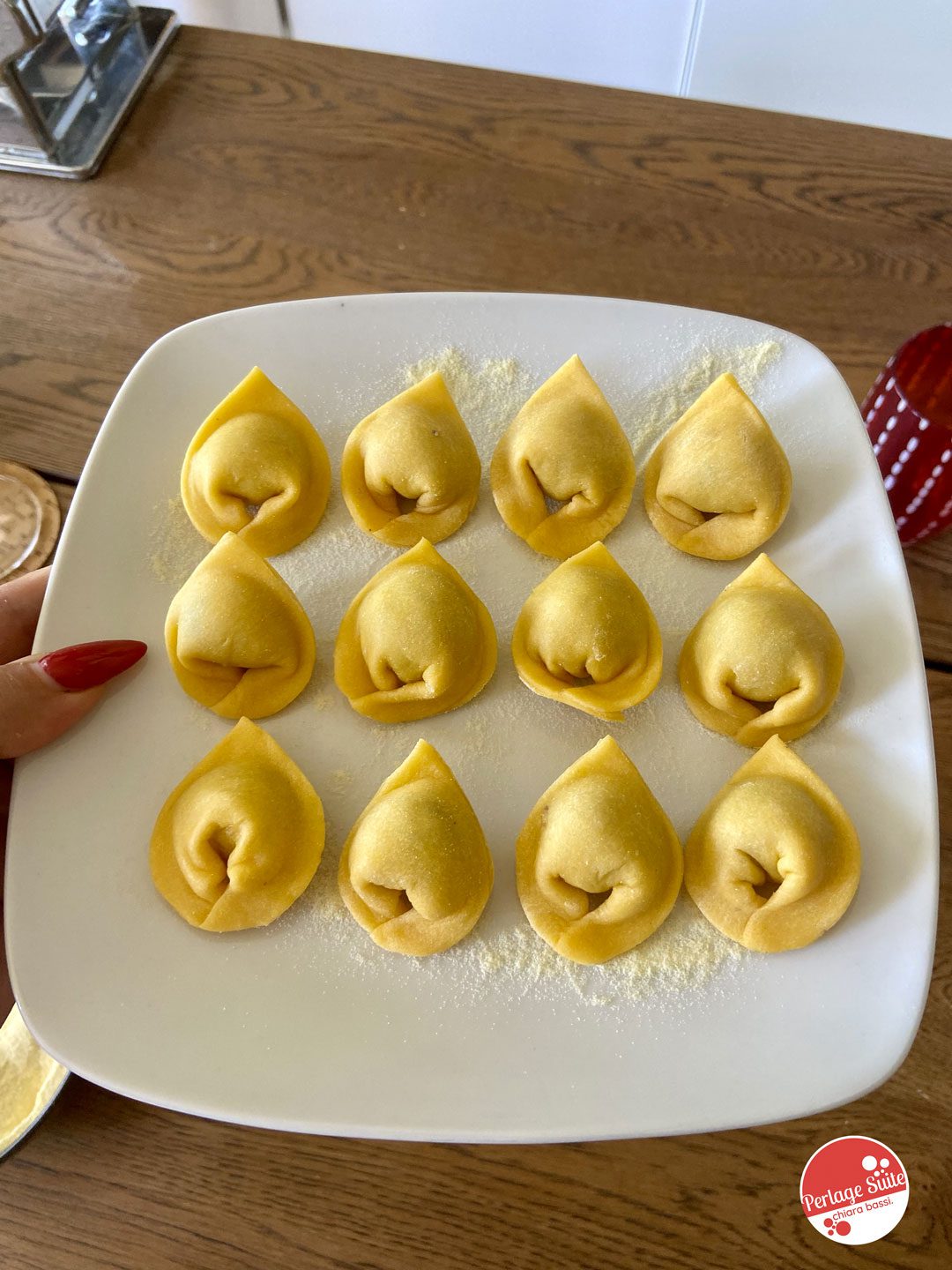 The gravy is essential in any recipe. In this it is particularly important because, being the recipe finished raw with saffron butter, it is the edge in which the pasta is sautéed that binds all the flavors.

Take the pan in which you cooked the agons and put all the agon heads you have available. Brown them with the oil already present in the pan, add another tablespoon of oil and to taste the tip of a teaspoon of chopped chillies. Fillet the 2 dried agoni and cut them into strips. Add agone and fresh basil (1 or 2 large leaves) and turn off the stove after 2/3 minutes. Remove the garlic clove and the fish heads.

Step 6: how to make casoncelli

Roll out the dough with the machine (I have been using this one from Marcato since 2006: indestructible!) To a thickness of 5 or 6. The thickness of the dough is a matter of tradition, flavor in the dish and personal taste. I tend to always prefer thick pasta so I choose thickness 5, but even a thinner sheet goes perfectly with this filling. After rolling it out, cut it with a square pastry cutter about 4 or 5 cm on each side. Put a nice generous teaspoon of the filling on each disc. I recommend: abundant! Brush the edges with a little water to close it better. Close forming a triangle by pulling the dough to the sides without filling, then turning on itself as if to crumple a candy and pinch / mash the edges. As a good Romagna woman, on the other hand, I closed the pasta like the classic cappelletto… it's not my fault, it's my DNA. 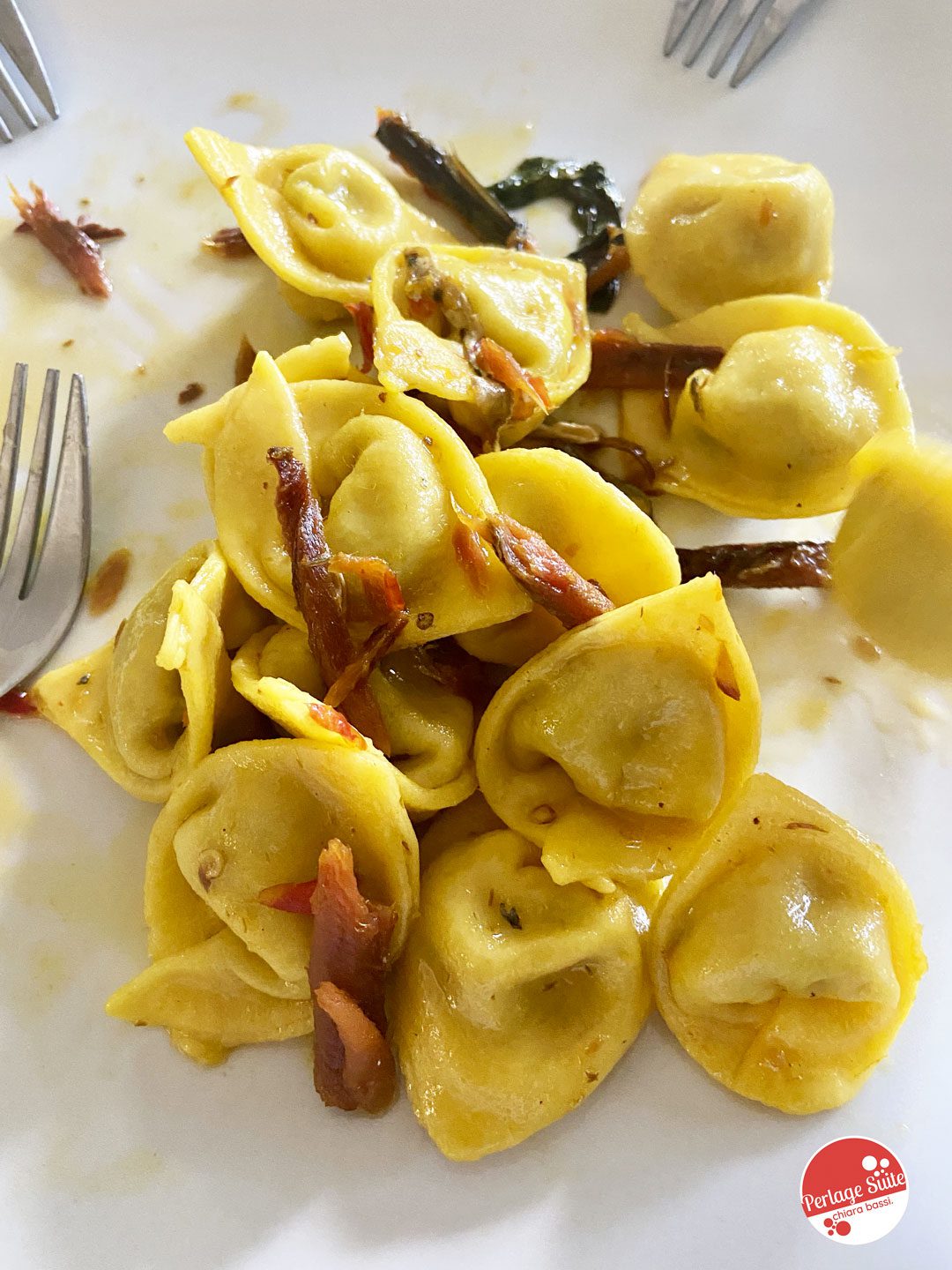 Take the saffron butter out of the refrigerator and transfer it to a bowl large enough to hold the pasta. Cook the casoncelli in boiling salted water until they come to the surface, then with a skimmer transfer them to the pan with the sauce, turn on the stove to minimum (induction level 3 out of 9) and mix gently with a pan licking until the sauce is absorbed. / evaporated almost completely. Turn off the stove and transfer the casoncelli to the bowl with the saffron butter and stir gently with the leccapentole.

Step 8: Serve in a workmanlike manner

Here we enter the field of Food Design. Serving properly is essential because you eat first of all with your eyes. A well-executed dish increases not only the perceived value of the food, but also the feeling of “good”. First we choose the dish of the right color: it must contrast with the ingredients, so we can choose between the white color and the black color. The pasta will be a nice deep yellow, but the sardine is dark in color and the white dish begs us. We choose a nice big plate and put the casoncelli in an odd number, I would say 7 or 9 maximum since we made them quite large.

Serving / 1: Without overdoing it and remaining in the space of genuine home cooking, we can put the casoncelli in the center with a large spoon… exactly as the director Gioacchino Castiglione asked me to do. By the way: congratulations for the professionalism and accuracy! I'm sure the footage will be amazing!

Serving / 2: A dish more in my strings (or my home cooking)? Arrange the casoncelli in a row, pour the cream of saffron sauce and butter over the casoncelli and arrange the sardine strips in an apparently disordered way. Complete with a vertical head and a basil leaf. Simple, fast and elegant! 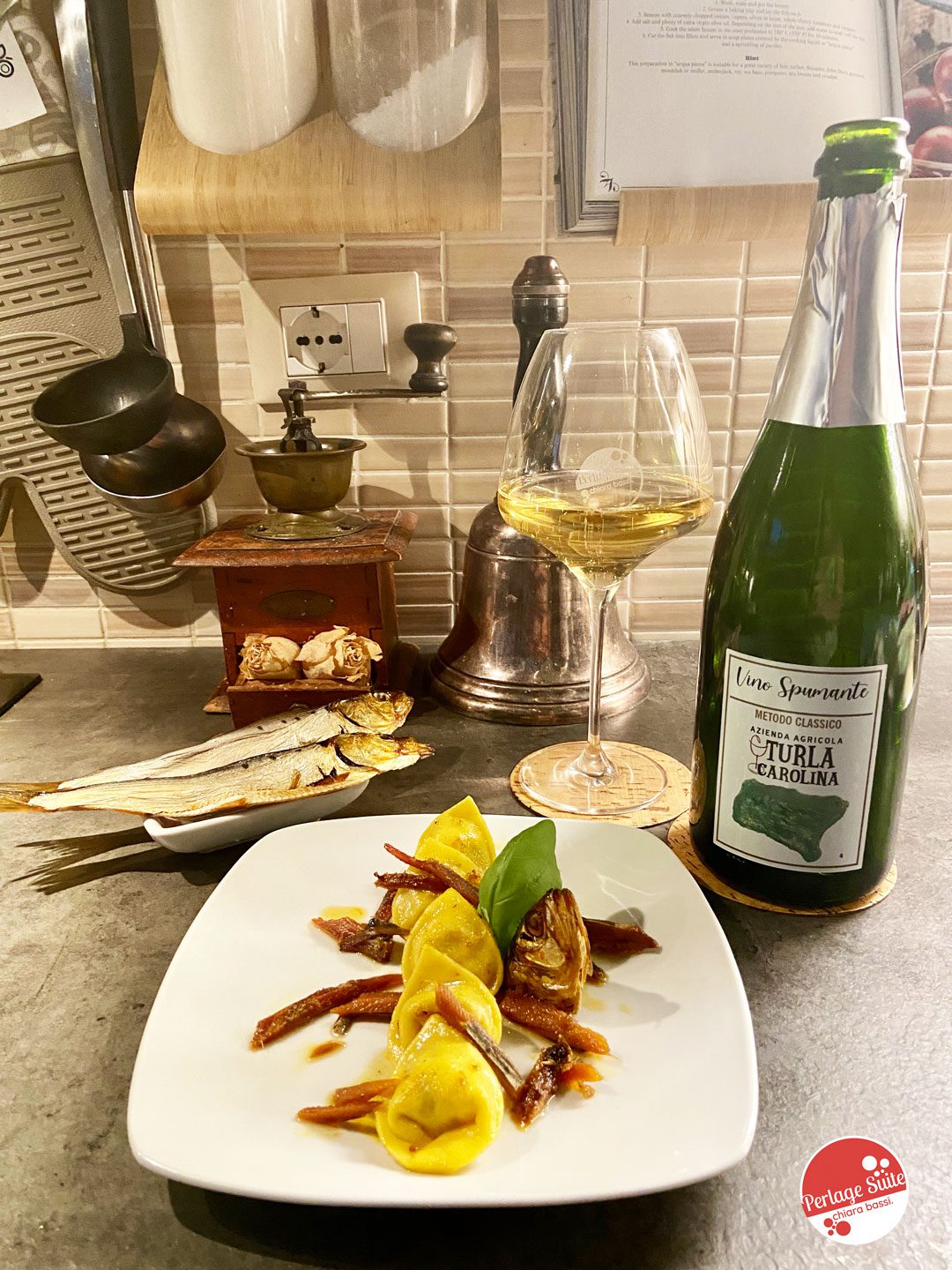 Intense and brilliant golden yellow with a fine, numerous and persistent perlage that forms an abundant and evanescent foam. The nose is intense and very fragrant with notes of white chocolate, hazelnuts, brioche bread, amaretto, lemon jam, candied mandarin, acacia flowers. In the mouth it is coherent, crunchy, elegant, savory, fresh and with those evolved notes I like them so much. Long finish of candied mandarin and saffron butter: this is why it goes wonderfully with our agone and saffron casoncelli! Super! 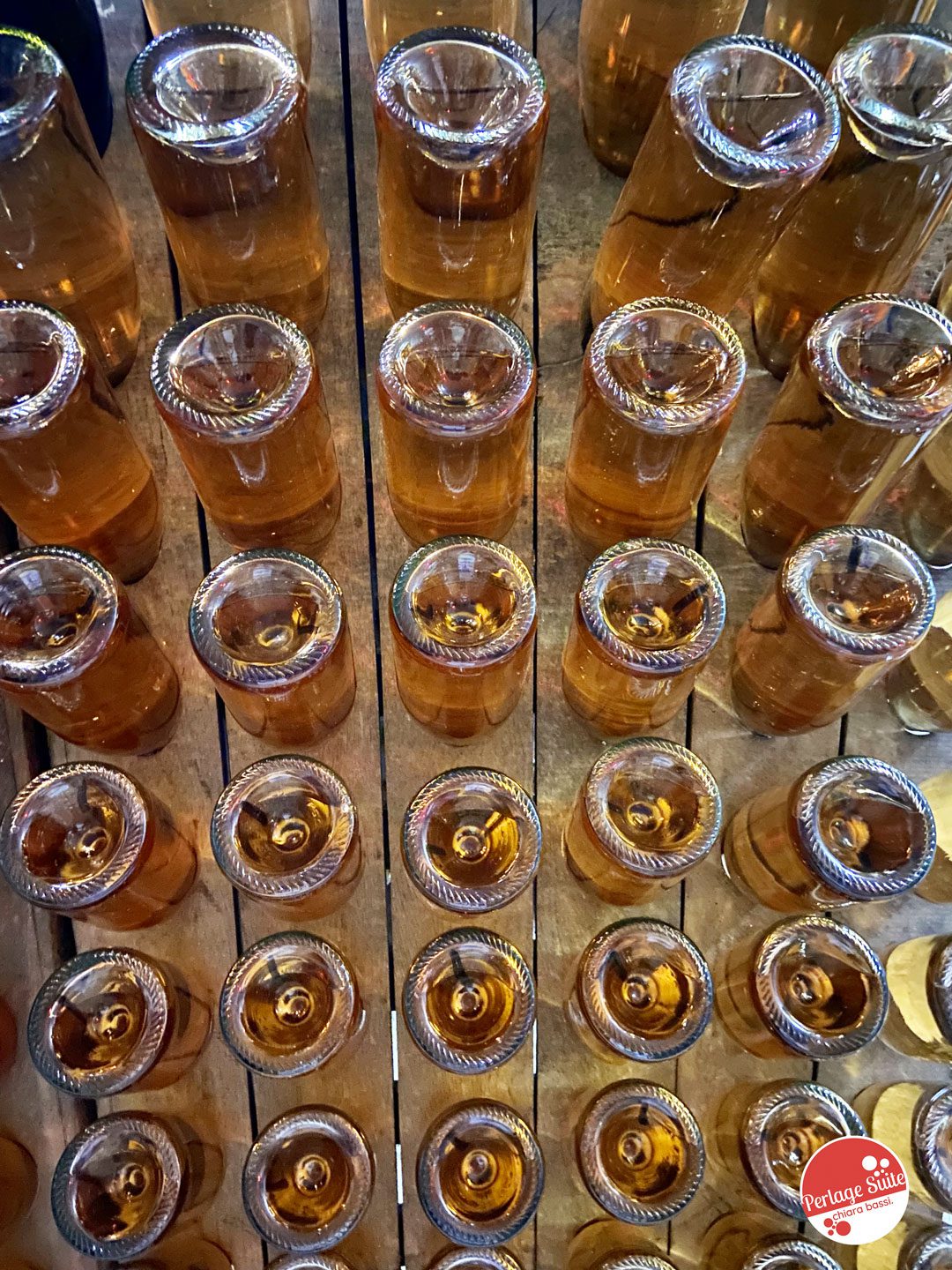 Finally, thanks to Guglielmo Novali - our talented city councilor for tourism and culture - for having thought of me to represent Monte Isola on this important occasion. I know, I've only been living here for three and a half years… but I feel as much Montisolana as I feel from Romagna and I wouldn't want to live anywhere else in the world.