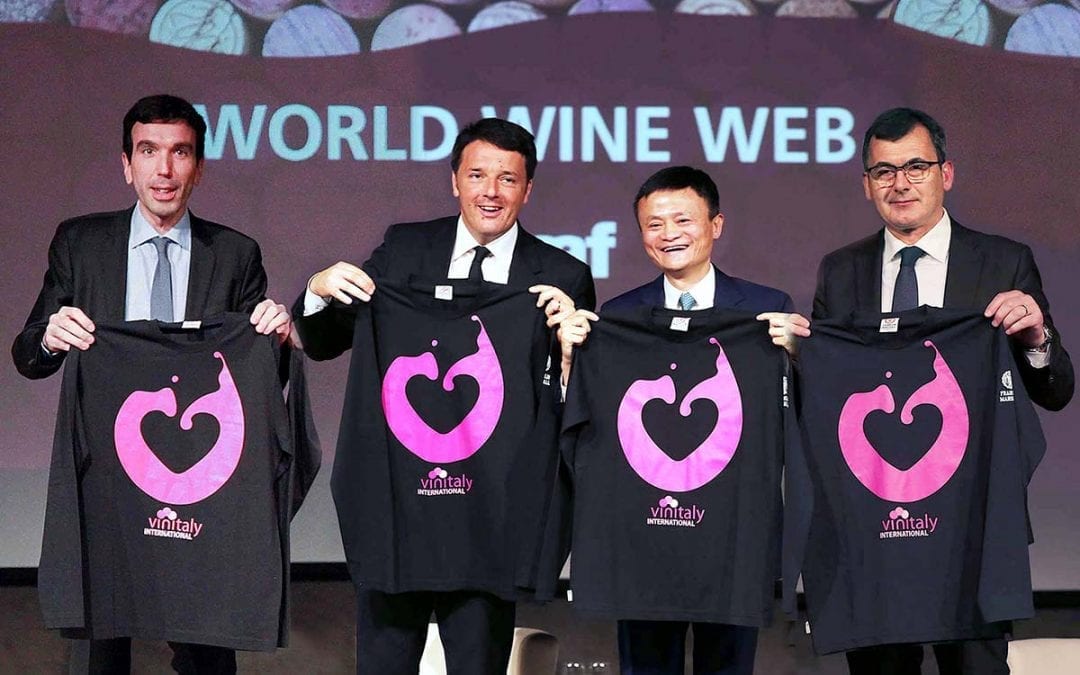 How to sell Italian wine in China it is a theme that is very close to my heart, especially after Vinitaly 2016 and the promises of Jack Ma to Matteo Renzi ... and the last website I created about wine: TASTEvie.com which helps Italian producers sell their wine in China thanks to a series of reliable partners on the spot and a very rich database of Asian importers.

China is the largest wine market in the world, and it is no coincidence that in the 50th edition of Vinitaly the importance of conquering it was emphasized. Prime Minister Matteo Renzi met the Chinese Jack Ma, founder of Alibaba, in a debate on the future of wine and the challenge of digital, moderated by director of the Republic, Mario Calabresi. The potential is enormous, because China already has a middle class of over 300 million people. France, with its 55%, came first compared to Italy, which occupies only 6% of this huge market. TASTEvie's goal is to shorten distances thanks to the agreements made with thousands of Chinese distributors who can't wait to discover your company and buy your wines on our online wine shop.

So when Federico Sferrazza of Daxue Research, an important Chinese company with bases in Beijing, Shanghai and Hong Kong that deals with market research using an international team and among its customers also includes Samsung, Carrefur, Inter Rhône, PayPal, Marc Jacobs, the Swiss Government, the The Mexican Government and the European Union (just to name a few) and of which the Financial Times, Le Monde and other newspapers around the world speak, contacted me again to offer me publications concerning the sale of Italian wine in China. I am immediately enthusiastic!

The theme I wanted to explore with them is the new wine consumption trends in China, in order to understand how the consumption of Italian wine can be included in these.

But let's start with order, what is currently happening in China?

According to a brand new research by Vinexpo / IWSR, the wine market in China continues to be hit by government austerity measures, the country's economic slowdown and the anti-corruption campaign. A study recently published by the same company found that subjects with the capacity to drink wine in China have consumed almost 132 million boxes from 9 liters of red wine in the 2015, 7 million less than the 2014 and almost 17 million less than the 2013. According to Li Demei, associate professor of Wine Tasting and Enology at Agriculture Collage in Beijing, the rapid growth of the wine market in previous years "was not fully supported by real market needs, and as soon as the central government changed the its policies, many distributors have exited the market ”. This answers the question that too often I have been asked by Italian wine producers I know: How to retain the Chinese importer? Everyone told me an experience that seemed almost "from script": large orders paid by bank transfer that gave us hope for a bright future, and then no more news.

Curious that this decline occurred when Chinese customs data from the first 9 months of the 2015 indicated that wine imports increased by 38,7% by volume, with almost 300 million liters for a total value of around 1,4 billion US dollars . No?

French and Australian wines dominated the import market, with an increase in French wine imports exceeding 36% in volume and 34% in value equal to more than US $ 623 million. However, these numbers remain lower than those of the pre-austerity period ... and let's face it: experts do not expect a complete recovery of the wine market in China in 2016 ... so maybe you are wondering ... "What are Renzi and Jack Ma chattering?"

The austerity situation in which China now navigates has made it even more difficult to penetrate this market ... and this is why, for example, TASTEvie was born, an Italian startup that acts as a bridge between Italian wineries and Chinese distributors, even managing shipments and freeing wineries of all worries!

And do you know why? Although recent market research in China shows that retail prices and retail values ​​will continue to decline over the next few years, and that Chinese domestic wines are making their way to covering around 80% of wines consumed in China in 2014, Made in Italy is the brand par excellence in the eyes of the Chinese and it is fashionable and status symbol to sip an Italian bubble at the bar counter.

Although red wine has been the first choice for a very long time, it has lost 4,9% over the last 5 years in favor of sparkling wines and sweet wines, much preferred by Chinese wine consumers. In particular, the Classic Method and Prosecco play a leading role in today's wine consumption trend in China ... so if you have a winery and produce bubbles or sweet wines, you just have to ride the wave on TASTEvie!

Experts claim that starting from 2017 the market will increase sales, with a growth forecast of 5% every year until 2020 and that the category with the greatest potential is the wine sold at an average price compared to the range labels. high that until today have dominated the market. In fact, Chinese consumers, with a greater awareness of the value for money, will be able to look for better bottles without spending the crazy figures of Australian wines, but above all the consumption of wine will go from being more a fashion than anything else, to being born from a real appreciation of what's in the glass.

With the growth of the middle class, in fact, China is developing more and more interest in wine and many companies that previously focused on high-level wines are moving towards mid-range wines to meet new market demands.

Another gem: do you know that the Chinese prefer gorgeous and colorful bottles? In my opinion, the future of Italian wine in China is in a niche that has perhaps been neglected until now: that of rosés. You know, before buying the contents you buy the package ... and the transparent or satin bottles that contain this wine with shades of bright pink are certainly irresistible for this people so fascinated by certain sparkles. After all, they are also for many of us Italians! 😉

In short, as long as you move with care, China is no longer a mirage for Italian wine which has the right characteristics to penetrate a market until now reserved for France and Australia.

Certainly Alessandro, founder of TASTEvie and I will do everything possible to realize the "Italian Dream" of Wine in China!

Thanks again to Federico Sferrazza of Daxue Research for giving me the opportunity to write this article.

PS If you are interested in selling Italian wine in China, I suggest you read these details: