Whiskey or Whiskey? Production and tasting. 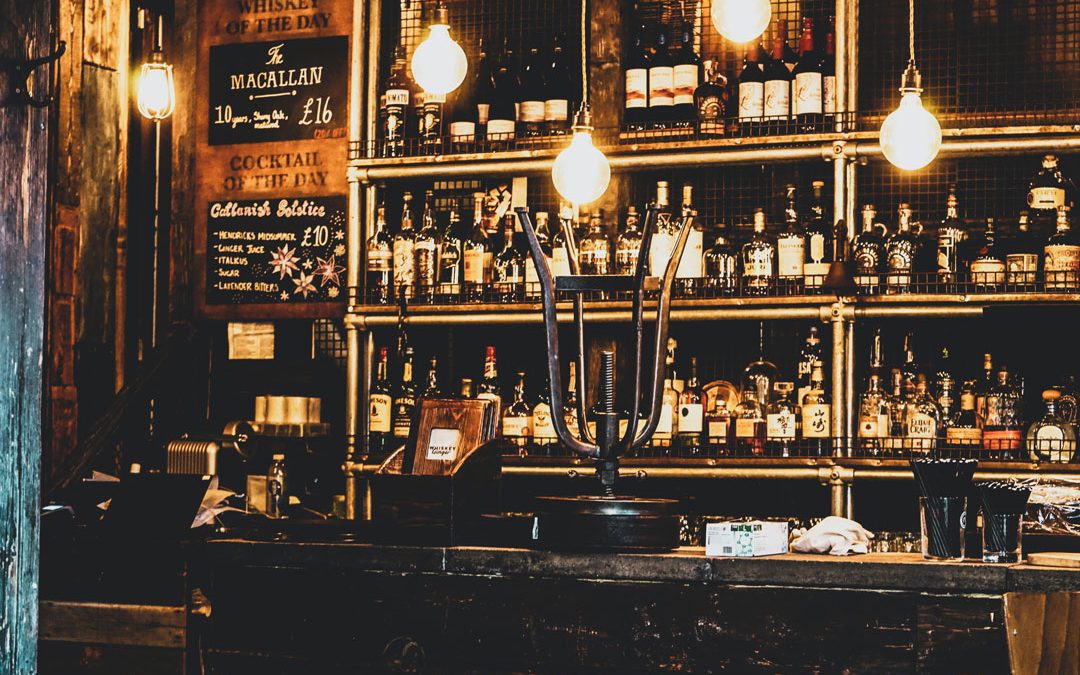 Whiskey or Whiskey? After writing this article on spirits and about the distillation process, I decided to talk to you about the finest of grain distillates (malted or unmalted): Whiskey. The Whiskey is only Irish and American, which follows precisely the same style of production. Choosing a good bottle of Whiskey capable of respecting our tastes is not at all easy, also because just as there are many PDOs and many wineries, there are many styles and many distilleries. Before writing you an article "aimed" at choosing the best whiskey (for you) I really want to talk to you about styles and places of production.

In Scotland no Whiskey can be bottled and released before having spent at least 3 years in oak barrels (usually malt whiskeys have 5, 7, 8, 10 years of aging). The ideal barrel aging period is said to be 10 - 15 years. The 4 historic areas of Scottish Whiskey production are the Lowands (softer), the Isle of Islay (very dry and peaty, often pungent, with a particular accent of seaweed), Campbeltown (brackish note), Highlands (more complex and enveloping, smoky scent not too accentuated caused by aging in the barrels where the Sherry rested).

In IrelandWhiskey is produced especially in County Cork. Obtained from malted and unmalted barley, with possible% of other cereals, that produced only from unmalted barley (60-80%) and malt (20-40%) in discontinuous pot stills (wider than the Scottish ones is called Whiskey d 'Alembic (underlines the importance that the Irish give to the distiller). While the Scottish Whiskeys are distilled twice, the Irish Whiskey is obtained with triple distillation resulting in a cleaner product and richer in ethyl alcohol. then to the reduction of the alcoholic degree with distilled water up to bring it to 40 °% vol. Aging proceeds for at least 3 years, but it almost never exceeds 10-12 years. 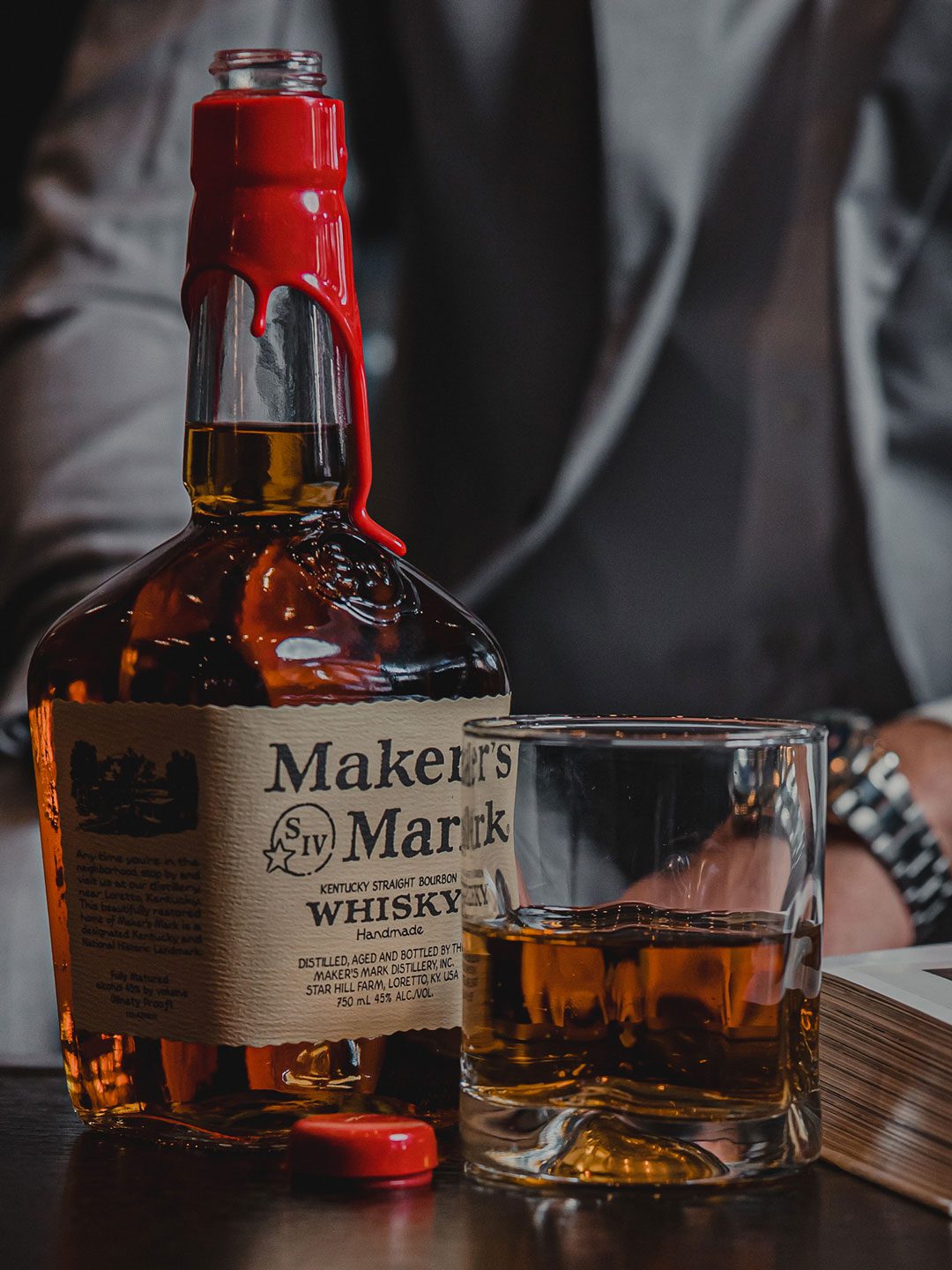 In United States, in the County of Kentucky, Bourbon Whiskey is produced, characterized by a strong spicy note of vanilla due to the passage in new charred barrels. Bourbon Straight must age at least 2 years in new barrels, but if they do not report the age it means that the aging has been at least 4 years. Here, too, you never exceed 10-12 years. Rye Whiskey, on the other hand, is an American classic, it is produced with at least 51% rye and must be aged in new charred oak barrels. The Straight Rye Whiskey must not have been diluted with pure alcohol and must have rested at least 2 years in wood. If the age is not ofchiarata means that the aging was at least 4 years. It has a spicy, bitter and mentholated hint.

In Canada Whiskey is produced from rye with the addition of corn with added neutral alcohol which lightens the final taste. Rye is often malted to give the distillate more softness and fullness of taste, which is slightly spicy and with a typical bitter-sweet hint. The blending is based on 15-20 rye whiskeys obtained from musts fermented with different yeasts, often with the addition of small parts of corn distillates, unmalted barley and a Bourbon-type whiskey. By law, Canadian Whiskey must rest at least 3 years in small barrels used for Sherry, Bourbon or Brandy, or new (which brings the sweet note of vanilla). Here, too, you never exceed 10 - 12 years.

In Japan slightly peaty malted barley is used. The fermented product is subjected to a double fermentation in the still and the malt whiskey that is obtained is aged in new oak barrels for the most part charred, or barrels used for Sherry or Bourbon. A small part is marketed as Single Malt while all the rest is mixed with Whiskey of cereals distilled in continuous columns to create the various Blended. It differs from Scotch whiskey for the intensity of the perfume and the nuanced aroma of the peat that leaves room for the malt.

Now you can subscribe to my newsletter or scroll down the page to continue reading the article! 😉

Since the XNUMXth century, in Scotland, monks distilled Malt Whiskey with barley, peat and pure water. The classic Whiskey produced in Scotland is called Single Malt and is obtained only from malted barley from a single distillery. If instead i Pure barley malt whiskeys from various distilleries are blended to blend the best characteristics you get a commonly called Vatted Pure Malt.

The grains of ripe and dry barley are immersed in maceration tanks for 2-3 days, so that they absorb the water necessary for germination. Once the excess water is removed, the wet barley is spread, in layers of about 50 cm, on the floor of well-ventilated buildings called malting houses. Here it is turned over with the aid of mechanical systems or, rarely, by hand.

The grains sprout and the starch is transformed into maltose by the action of enzymes. After about 8 days, the germination of the green malt thus obtained is blocked by blowing hot air obtained from the combustion of the peat which will give the barley its typical smoky aroma and taste.

Once the beans are dried and the radicles are removed, they are milled and a flour is produced which is then added with water at about 70 ° and placed in infusion vats (underback). In these the mixture is stirred hours to extract the soluble sugars. The unfermented boiling must (wort) is filtered to separate the grains, cooled at 20 ° C and transferred into large tanks (washback) in which selected yeasts are added to start the fermentation process.

The sugars ferment and in the first 36-48 hours foam and heat develop until it becomes a still liquid with 7-9% alcohol. This fermented called “Wash” undergoes a double distillation in the typical copper stills (pot still), whose shape influences the character of the Whiskey. In the largest (wash still) the first distillation produces a liquid with 20-24% alcohol (low wine), subjected to a second distillation in a smaller still (low wine still). Here the heads and tails are eliminated and only the heart is preserved, with about 65-72% ethyl alcohol.

Subsequently the alcohol content is reduced with a little distilled water up to 60-62% and it is put to age in oak barrels, often already used for the rest of the Sherry or of the Port, of the Whiskey or of the Bourbon until it is ready. to be bottled. 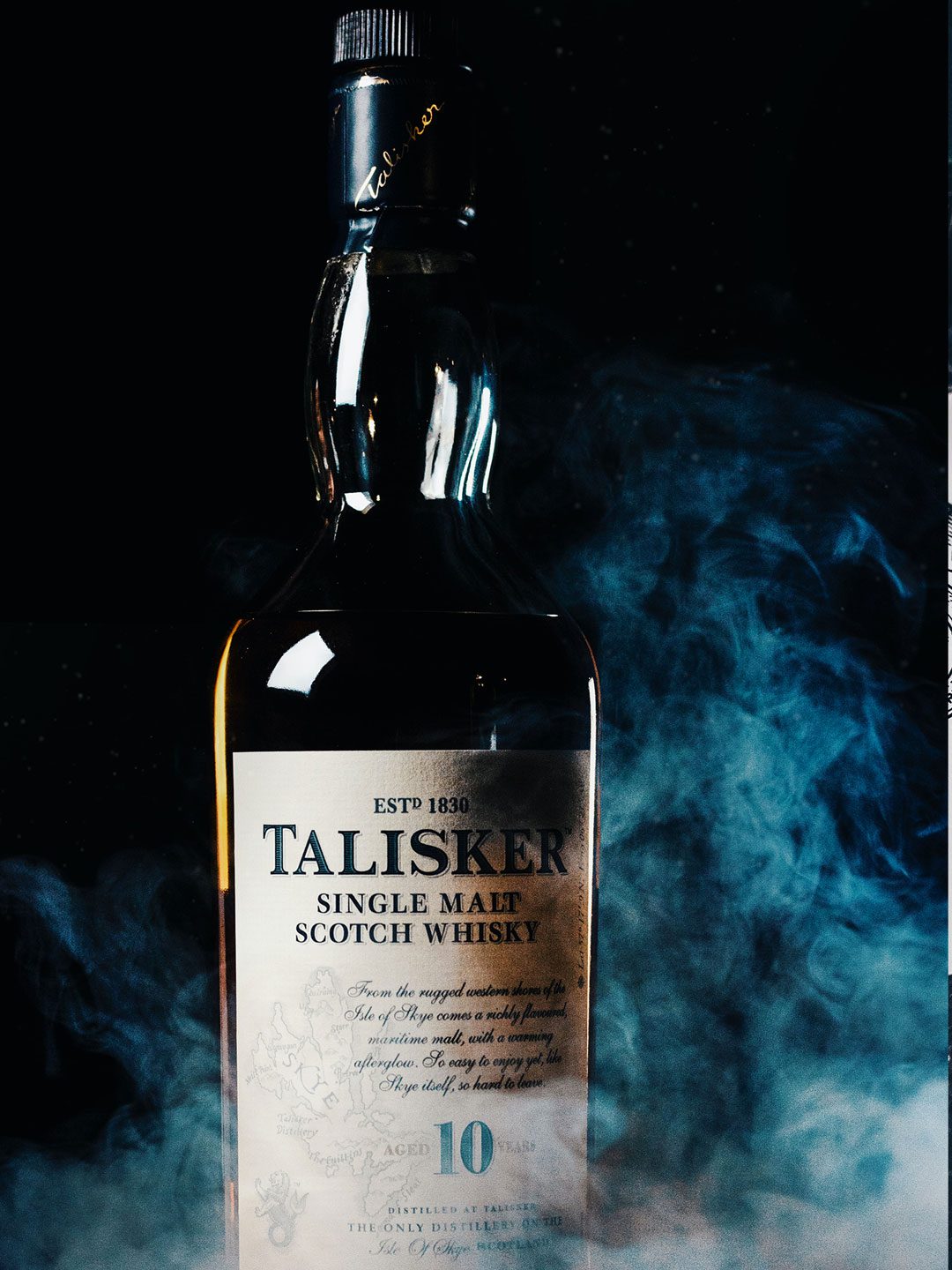 Around the 1850 in Scotland also Whiskeys are derived from cereals (wheat and corn) called Whiskey Grain (or industrial whiskey), distilled in column or continuous systems. If they are obtained from a single distillery they are called Single Grain, if instead one or more Grain Whiskey and one or more Malt Whiskey are mixed they are called Blended Scotch Whiskey.

They are obtained from cereals not malted but finely ground and cooked at high temperature. After infusion and fermentation, the distillation is continuous and takes place in a rectification column called coffey still: the heads are collected in the upper part of the column, the heart in the central one and the tails at the base.

This type of distillation is rapid, inexpensive and produces in larger quantities. Its product is rather neutral and without a strong personality, qualities that make it ideal for blanding or mixing, as well as for the production of cocktails. 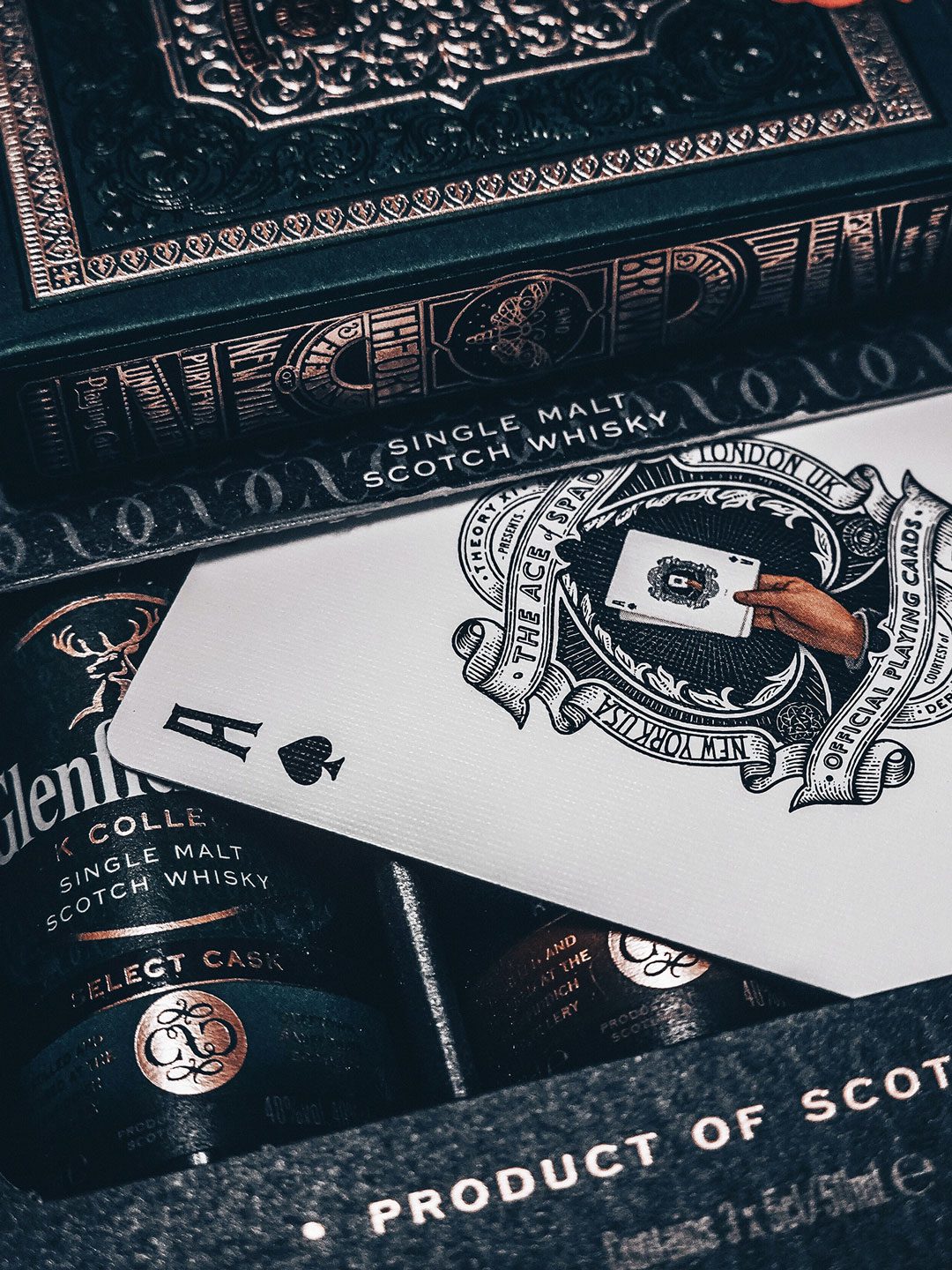 "Distillation is a science, blending is an art," said Samuel Bronfman. Blanding is the art of combining selected and aged Whiskey of the highest quality, each with its own aroma, with such skill as to make the whole better than the sum of its parts, without one dominating the other. They are created by the skilful blending of one or more Whiskeys of cereals, different origins and aging and born around 1850 both for cost reasons and for sales reasons. The best blended ones are obtained with a greater proportion of malt whiskey and an aging of more than 8 years. Standard, Premium, De Luxe and Super De Luxe are arbitrary definitions attributed by manufacturers but without legal notes.

The age reported on the label indicates that they were used in blending whiskey with an aging greater than those years. Commercial reasons and the evaporation from barrels of about 2-3% of Whiskey per year lead to the introduction on the market of younger products and therefore less expensive, with easier taste and consumption.

The Irish Blended are obtained from a mixture of various Whiskeys obtained from an industrial distillation in column systems combined with Whiskey still.

I sincerely hope you enjoyed this article and found it useful.